Last week, I wrote a piece that was mostly meant to stir discussion concerning BDS attendance. Today, I want to break it down some more and address questions raised in the comments.

One more thing: Aren’t we selling many more tickets post-expansion than before? We were at around 43,000, and attendance has been in the high-40s to low-50s. All those games would be sell-outs in the pre-expansion stadium.

The short answer is YES we are selling more tickets now that the stadium has expanded. Check out this timeline: 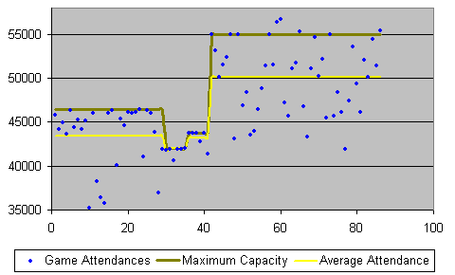 In fact, we're selling about 6,700 more tickets per game. Let's say we remove Georgia and Clemson from the entire discussion. We've still increased attendance by about 6,100 fans per non-uga/CU game. So the Clemson/Georgie deck wasn't built exclusively for the 'necks despite their best arguments to the contrary. Now, if the cheapest ticket is 38 bucks, then we've increased ticket revenue by a quarter million per game with the expansion. That's not too shabby.

Another interesting question was raised about how Tech fans pick and choose which games to attend rather than merely attending every game. This is broken down in the following chart:

Basically, it shows our average attendance, attendance for ranked opponents, attendance when Tech is ranked, and attendance when both teams are ranked. Now, is this trend an indictment of the Tech fan base? I don't think so. I believe that the similarity in attendances shows that Tech fans show up whether Tech is having a good season or not (only 400 fan difference between Tech being ranked versus unranked). There's no bandwagon attitude. Tech fans just show up. There may not be many of us but we show to every game. The spike for ranked opponents, I believe, is more attributable to larger, successful programs playing at BDS (e.g. Georgie, Notre Dame, Clemson, VT). Opposing fans are more willing to come to Atlanta if their team is successful and their odds of victory are higher. Hence, the following chart, which shows Tech attendance for victories is much lower than Tech attendance for losses (~3,200 people lesss since 2003): 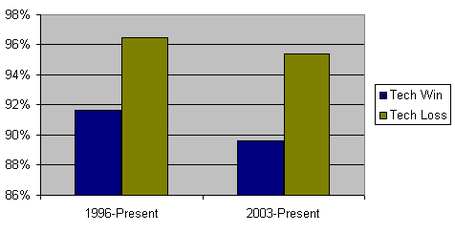 Any thoughts out there on BDS attendance? Any questions/concerns?