I've been keeping the home attendance figures since 2003. Ramblinwreck.com also publishes attendance figures all the way back to 1996 so that kinda helps, too. I was looking at the expansions and modifications made to Bobby Dodd Stadium yesterday. Starting back in 1996, we had a stadium capacity of 46,450. In 2001, this was cut down to 42,000 for the beginning of the North Deck construction. The South stands opened first allowing the attendance to increase up to 43,179 in 2002. And finally in 2003, the North Deck opened allowing the current capacity of 55,000 to fill the stadium.

I think the first question that anyone looking at attendance figures would ask is, "Why did Tech expand to a capacity well beyond its apparent needs?" Tech only sold out BDS 10 times in 29 games from 1996-2000 in the 46,450 seat capacity. That meant that expansion would only affect the total attendance of about a third of our games in the future. I think the decision was made in the pride department rather than the logic department.

Looking at stadium capacities in the SEC and ACC shows that Tech was only larger than Duke, Vandy, and Wake (three small private schools). An expansion to 55,000 would put Tech on par with NC State, Maryland, UNC, Mississippi State, Arkansas, and Ole Miss. This is a bit more respectable being that they're all public schools with larger enrollments. So my only reasonable explanation for the poor financial decision of expansion was for recruiting's sake.

And oddly enough, I didn't start this diatribe to discuss Tech's semi-folly known as stadium expansion. I want to discuss factors (ignoring opponents on the field) that affect home attendance. The first is weather. Does precipitation adversely affect the number of people that plan on attending a home football game? Well, here's a chart showing attendance percentage since 1996:

I broke it down with post-2003 because the attendance % was relatively high during those low capacity years. 2003-present reflects the modern seating capacity but also has a lot fewer data points, which is why I included the 1996-present data as well. And for your information, there have been 86 home games since 1996 with 20 gamedays experiencing rainfall.

The next factor concerning weather is temperature. And ironically, the cold doesn't deter Tech fans. What deters Tech fans is extreme heat. One of the lowest attendances since 1996 was a 95ºF kickoff against Boston College in 1998. Only 38,229 people showed up to the game. The question, however, can be asked whether or not it's the temperature or the time of kickoff. A later kickoff would typically mean a better opponent and some primetime television but for now that's irrelevant in my discussion. Here's a look at the effect time of kickoff and temperature at kickoff have on Bobby Dodd Stadium attendance: 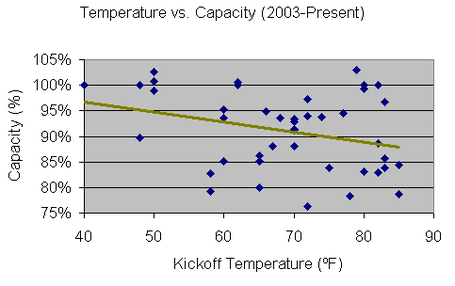 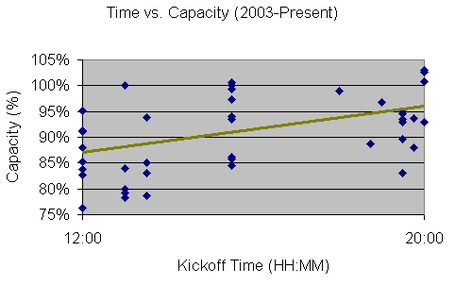 The gold line represents a simple linear regression. And the regression simply states that a cooler, later kickoff is better than a hot, early one. Opposition ranking, television, and other factors play huge roles but as I mentioned earlier I'm forgetting these factors altogether for this analysis.

Another factor I wanted to look at is a constant excuse for relatively low attendance at all sporting events in Atlanta, "There are too many options." So I pulled up the Braves and Falcons schedules and overlaid them upon the Tech schedule to see if there were any adverse effects caused by Braves playoff baseball or Falcons regular season games. I wasn't sure about this whole argument until I charted it up:

The idea is that families have to make a choice between one form of sports entertainment or the other and that if the Braves have a home series that weekend or the Falcons have a home game that weekend, the Tech attendance will suffer. And according to the numbers, this is true. Braves and Falcons games adversely affect Tech's home game attendance. In fact, since 2003, the average attendance of a game played on a non-Braves/Falcons weekend has 2,000 more people in attendance.

I think D-Rad has several options based on our conclusions: 1) Have the AE and ME's develop a weather machine and control the temperature and climate for our games. 2) Damn the TV sets. Schedule games later in the day. 3) Work in conjunction with the Braves/Falcons to ensure that home series aren't in line with Tech home games. 4) Tell Paul Johnson to go undefeated forever and there will never be an attendance problem ever again.