An Alabama Fan and Bobby Dodd

Share All sharing options for: An Alabama Fan and Bobby Dodd

At From the Rumble Seat, we deal with rival fans on a daily basis. I recently received an e-mail from a Bama fan. This Bama fan was upset with the bias we showed when I wrote this piece about the GT-Bama series after we postponed the GT-Bama series in 2014. To spare the drama, here's the e-mail I received a couple days ago:


In your article about GT and Alabama and the after whistle hitting of the GT player. I noticed you didn't mention the GT player who kicked the Auburn player in the head after the Whistle blew. This happened the same year after GT played Alabama. Also If I recall correctly, Bobby Dodd pulled out of the SEC saying GT would be an Independent like Notre Dame and did not need the SEC, but he sure was not winning many games while in the SEC playing the SEC schedule. Thanks for remembering these not so old times.
[CLASSIFIED], RPh
U of Alabama 1962-1966
Roll Tide

I hadn't ever heard of the GT-Auburn incident but I knew that Tech competed and was very successful in the SEC from 1945-1963. This is a very common misconception amongst SEC fans. The idea that Tech withdrew from the SEC because we couldn't compete is flat out wrong. So I wrote this response:

I respect your opinions but you are gravely mistaken concerning Georgia Tech's departure from the SEC. Bobby Dodd coached against 28 different SEC coaches. He only had a losing record against 4 of them (Bear Bryant, Shug Jordan, Red Drew, and Charles McClendon).

Dodd had an 83-43 record against SEC opponents while Georgia Tech was in the SEC and he captured two SEC titles during that run, which were more than Auburn, Kentucky, Tulane, Mississippi State, Vanderbilt, and Florida. In fact, the only squad with a winning record against Tech during Dodd's SEC run was Alabama. Competing with SEC squads was not the issue that drove Tech from the SEC.

Bobby Dodd did not agree with the practices of the SEC schools. It is a well documented fact that Bobby Dodd pulled Tech from the SEC because its member schools treated their players like cattle not humans. Football was not worth torturing, humiliating, and ruining college-aged kids to Dodd. All Georgia Tech men have the utmost respect for Robert Lee Dodd because creating a better team on the field was second to creating better men off the field.

Thank you for your time.

It was a quick response that I whipped up with some excel magic. I decided to research the Auburn-face-kicking incident as well and a scanned article from Hendersonville, North Carolina's Times-News popped up on Google. The article was dated October 22, 1963 (three days after Tech played Auburn). Here's an excerpt:

Georgia Tech's Ted Davis, a standout end, yesterday resigned from the school's football team after publicly [apologizing] for kicking Auburn halfback David Rawson in the face during Tech's 29-21 loss to Auburn last Saturday...Davis said he was quitting the team to save Tech the "embarassment of kicking me off the football squad."... Davis said his actions, "violated every standard Coach Dodd sets for his football players."

Later on in the article, it reads:

The incident recalled the Chick Granning-Darwin Holt elbow altercation in 1961...Granning was hospitalized and lost for the rest of the year. Holt apologized for the incident but remained on the team and no disciplinary action was taken.

Clearly, there were two different sets of standards at play during this Era: Dodd's standards and everyone elses. Dodd lost an All-American and future NFL Draft Pick in Ted Davis. Darwin Holt was a scrub that played special teams for the Bear. Hopefully, fans of opposing teams who read our blog understand why we have so much respect for Bobby Dodd. The man was a great coach but was an even greater man. Many of his coaching peers were merely great coaches.

Here's the breakdown of information concerning Dodd vs. SEC teams while Tech was in the SEC (1945-1963): 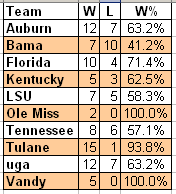 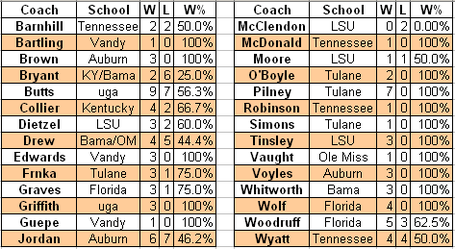