Two SBNation baseball blogs conducted MLB Mock Drafts in anticipation of the Draft being about a month away on. First off, John Sickels of Minor League Ball projected the first and supplemental rounds of the Major League Baseball draft yesterday. A second baseball blog, MLB Bonus Baby conducted their 5th Mock Draft for the first round only.

The Georgia Tech influence is felt in both rounds in Deck McGuire and signee DeAndre Smelter.

In the 1st Round, Sickels projects Deck going as the 7th overall pick to the New York Mets.

The Mets are usually conservative in the draft, and I don't think that will change this year, so I have them opting for a nice safe polished college arm.

Almost all of the Padres' high-level brass has seen McGuire in person over the course of the season, and I'd be surprised if he fell past this spot barring injury or a complete meltdown late in the season. The upside isn't huge, but he's solid and a perfect fit for Petco Park. He could be a big part of the next successful Padres team.

I have seen these scouts at the game. Seiler's right. There's been a good amount of Padres personnel. A top-10 pick for Deck McGuire is great news and we thoroughly look forward to this becoming a reality.

Some of you may not have heard of DeAndre Smelter, a flame throwing right-hander out of Tattnall Square Academy in Macon, GA. He has committed to Georgia Tech but don't count on him ever donning a uniform. The Baseball Rumor Mill says: Smelter is a 6-foot-3, 215-pound right-hander with broad shoulders and a thick lower half. He rocks back and fires 89-92 mph fastballs from a lower three-quarters arm slot and touches 93. Smelter hides the ball well and mixes in an 83 mph changeup and an 80-81 mph slider. He’s a good athlete who ran the 60-yard dash in 6.6 seconds. 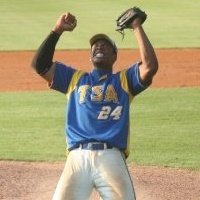 The Red Sox have the money to buy him [Smelter] away from Georgia Tech, and his athleticism and arm strength are very impressive.

It should be a known fact that Smelter is never going to step foot on campus. Rather, we should all take some sort of pride that he committed to us and be happy with that thought itself. He's just too good to stop in for some college ball.