It's no secret to the ACC that Deck McGuire is Georgia Tech's Ace. He leads Tech in strikeouts per game, innings pitched, and ERA. McGuire is projected by several MLB Draft guys as a first rounder. Since I'm not a baseball guy like Winfield, I wanted to look at his stats versus ACC bats to see why he's peaked the interest of so many MLB clubs. 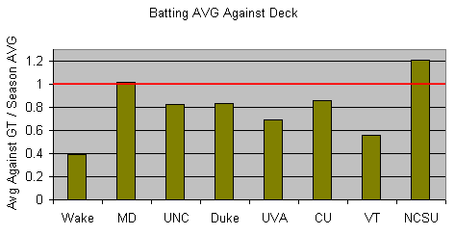 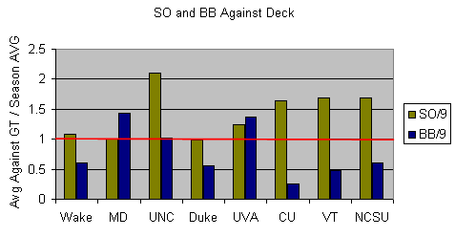 This chart is really what gets MLB scouts amped up. Deck strikes out a ton of mofos. Deck strikes out about 9.4 batters per 9 innings. When our ACC opponents are not batting against Deck, they only average 6.6 strikeouts per 9. Basically, our opponents are only playing 8 innings of offensive baseball against us because Deck is negating an entire inning with strikeouts.

You'll also notice that only three squads racked up above average walks per 9 against Deck - UVA, UNC, and Maryland. This is a little deceiving, however, as Deck's SO:BB ratio in these three games combined was still an impressive 11:5. The problem was more so that he walked players on two teams that don't get many walks (MD and UNC) and UVA just beat us down. 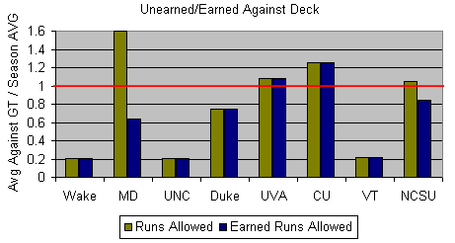 I don't really need to harp on this chart too terribly much. It's just a breakdown of Tech's total defensive effort and Deck's actual ERA compared to our opponents' actual scoring averages. I didn't really want to go through every box score and figure out each team's actual earned versus unearned runs.

The only other point I wanted to present is that out of eight ACC Friday pitchers, five have improved their ACC ERA against Tech. Tech is struggling against aces. Deck's not gonna get the wins if he doesn't have run support. Winfield's concerns may come to fruition come postseason when we're only seeing star weekend pitchers.