Nick Rogers, a former Georgia Tech defensive end from East Point, GA who attended St. Pius High School passed away yesterday after being involved in a car accident. While I cannot find a link and no one can supply one, his facebook page has had a lot of activity regarding his death. 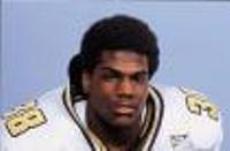 Rogers played tandem with Greg Gathers in 2000 and 2001. The two combined for 38 sacks and 63 tackles for loss. He individually ranks in the top 10 in both sacks and TFLs in Georgia Tech history. He received his degree in Management in 2003.

In 2002, he was drafted by the Minnesota Vikings in the 6th round and became had stints with the Green Bay Packers, Indianapolis Colts, and Miami Dolphins. His football playing career came to an end in the Arena Football League with the Colorado Crush.

Our deepest feelings of sorrow are directed towards Nick and his family.