Hoops Alum rollin' in the Greenbacks

Share All sharing options for: Hoops Alum rollin' in the Greenbacks

If you thought football salaries were ridiculous, then you'll think these hoops salaries are reDUNKulous! Check out Starbury and Kenny Anderson... These are guys' salaries taken from the same database as the football players (going from 2000 up to last season): 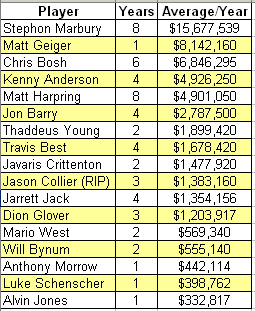 The sad thing is reading stuff like this about our former players:

Ringing up nearly $41,000 in monthly expenses, including child support to eight kids and his mother’s house payment, former NBA guard Kenny Anderson filed for bankruptcy in October 2005. How did his estimated $60 million dwindle to nothing? Easy. He kept 8 cars in the garage of his five-bedroom Beverly Hills home. He gave himself a monthly allowance of $10,000 that he dubbed "hanging out money." He regularly handed out $3,000 to $5,000 to friends and relatives. Finally, he lost $5.8 million in a prenup agreement...