Ever wonder how much money Calvin Johnson banks per year? Or how much Joe Hamilton made during his brief stint with the Bucs? USA Today put together figures all the way back to 2000 on NFL salaries, bonuses, and cap information regarding every player that received a paycheck from NFL teams (excludes 2010 salaries and Draft picks). They have it for NBA, MLB, and NHL, too. I'll get to those databases later. Here's a look at active Tech players in the NFL and how much jack they've got in their pocket: 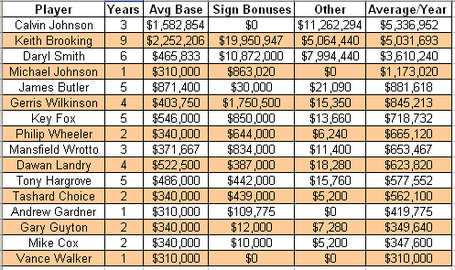 I took the average for salaries but summed the bonuses in the two columns. Those are some staggering numbers. Calvin, Daryl Smith, and Keith Brooking have made almost three times more money since 2000 than all of the other Tech players since George O'Leary was head coach combined. Here's a quick run down of the players that are inactive as well: 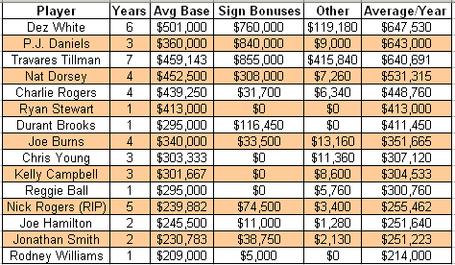