Share All sharing options for: The Ultimate Sporting City: Dallas vs. Washington DC

The rivalry between the two cities began in 1960 when the Cowboys became an NFL expansion team. In 1958, soon-to-be Dallas owner Clint Murchison Jr wanted to buy the Redskins and bring them to Texas. At the last second, Redskins owner George Preston Marshall wanted to change the terms of the sale. Murchison was so angry he canceled the sale. More drama followed over copyright issues regarding the respective teams' fight songs.

John, tell everyone about Dallas. 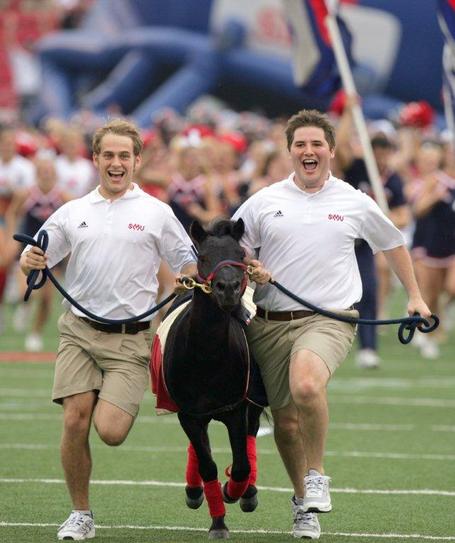 Major Venues
The world's largest HDTV. A $1.3 billion dollar construction cost. 80,000 seats plus space for 10,000 standing spectators. Cowboys Stadium is the crown jewel of the Texas Sporting World. Built from 2005-2009, the Stadium now serves as the home of the Cowboys, Cotton Bowl, and Big 12 Championship. College hoops and football games have already been played in Jerry Jones' behemoth. The 2014 Final Four is scheduled to be played here as well. The lone downfall is a lack of public transportation. Everyone has to drive to every game. Another downfall of the massive television is that it's a bullseye for punters. Longwood University physics professor Christopher Moore explains:

The Fans of Dallas
Dallas has pretty big time hoops and football fans. They oversold every game in Cowboys Stadium and the America Airlines Center last season leading both the NFL and NBA in attendance. It doesn't hurt that both franchises are led by owners that want to win as well. The ownership takes pride in their franchises and this trickles down to the fans taking extreme pride in their franchises. And when these franchises aren't winning, head coaches' heads roll (e.g. Avery Johnson, Don Nelson, Dave Campo, Chan Gailey, Bill Parcells...) The fans of Dallas demand excellence and its definitely mirrored in their ownership.

As far as college sports go, Dallas fans are split amongst UT-Austin and TAMU with tricklings of Texas Tech, TCU, and Baylor fans in the mix. And if you've ever been to Dallas, there's no avoiding the massive displays of burnt orange paraphernalia. You're also bound to run in to a former Cadet from TAMU (one of the few schools in the country with traditions on par with Georgia Tech).

Great Teams/Sporting Moments
The 1990's Cowboy Dynasty defined modern football excellence. And it all is traced back to the biggest blunder in NFL trade history. The 1989 trade of Hershel Walker to the Vikings for 5 veterans and 8 Draft picks set the stage for the accumulation of Dallas' greatest playoff run in the history of the franchise. During the 11 year Troy Aikman Era, the Cowboys made the playoffs 8 times, won the division 6 times, and won the Super Bowl 3 times. Hence, the dubbing "America's Team" as America got to see the Cowboys every Winter on national television.

Great Individuals
Despite being fired by Jerry Jones in 1989, Tom Landry is why the NFL is the most popular sport in America. He literally invented the 4-3 defense. Before Landry, defenses featured a 5 man front with a nose tackle, two DT's, and two ends. Landry dropped the nose tackle and created the middle linebacker position to add increased flexibility to his defense. Landry also developed what is generally considered the modern offense. He instituted a plethora of shotgun formations and plays from the shotgun into his playbook using presnap motion, which had generally lost favor amongst NFL teams. Landry used the motions to create mismatches in his passing attack and to set defenses off balance when they watched offensive formations flip before the snap.

By 1986, 5 former assistant coaches under Landry were head coaches: Mike Ditka, Dan Reeves, John Mackovic, Gene Stallings, and Raymond Berry. Landry also developed the positions of quality control coordinator and strength and conditioning coordinators, which have become staples of every professional team in almost every sport.

Random Trivia
Georgia Tech played a 10 year series against Southern Methodist from 1950-1959. Tech went 7-2-1 during that series with the only two losses occurring in Dallas at the Cotton Bowl. SMU hosted most big games here rather than on campus at Ownby Stadium because of Ownby's limited capacity. Georgia Tech also played Texas in the 1943 Cotton Bowl Classic in Dallas as well as against Arkansas in the 1955 edition. Georgia Tech hasn't returned to Dallas since 1955 in football and maintains a 4-3 overall record in the City. Following the football series, Tech also scheduled a hoops series with SMU from 1959-1971. Tech hoops was much less successful against the Mustangs going 7-6 during the run with an abysmal 1-6 record in Dallas at SMU's Moody Coliseum.

If you think Tech's history in Dallas ended in 1971, think again. Tech's star point guard Mark Price was drafted by the Dallas Mavericks in 1986 only to be traded to Cleveland. What did the Mavericks get in return? A 1989 second round pick (Pat Durham the NBA washout). And the final encursion in to the Dallas area was in 1989 when Tech lost to UT-Austin in the first round of March Madness.

Alright, alright but what about Washington DC? The Capital of the FREE WORLD?! 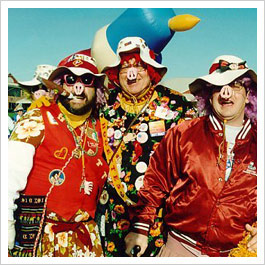 Washington is a small area with minimal space. Therefore it must thrive on the versatility of its arenas and venues. The Verizon Center is the home of the Georgetown Hoyas, the Washington Wizards, and the Washington Capitals. While Bird may have told you about Dallas and its awesomely huge TV, he couldn’t speak for originality. In 2007, the Center was the home of the first true indoor high-definition LED scoreboard. The venue also owns the distinct honor of hosting Mike Tyson’s final boxing match of his fighting career.

It is known that we don’t follow hockey very well on this blog. However we have have still heard of a certain individual by the name of Alexander Ovechkin. Rookie of the Year in the 2005-2006 season, Ovechkin has continued to dominate the league both in stats and in excitement. (I actually do watch some hockey and the man is ridiculous!) He has led the league in both goals and points and for the 2009-2010 season was named the league MVP.

A more familiar individual will be John Thompson, the architect of the Georgetown basketball dynasty of the 1980’s. Thompson spent 27 years at Georgetown and won 72% of his games, leading his squads to 24 postseason appearances, 3 Final Fours (1982, 1984, and 1985) and 1 National Championship (1984 vs. Houston). He coached the likes of famous NBAers such as Patrick Ewing, Alonzo Mourning, Dikembe Mutombo, and Allen Iverson. Plus he’s a pretty good radio broadcaster.

The Fans of DC

The fans of Washington are similar to Atlanta in the transplant base foundation and it seems to depress some of the homers. In the frustrated words of Kevin Ewoldt of the Redskins blog Hogs Haven:

Ted Leonsis has gone above and beyond to keep opposing fans out of the Verizon Center making Caps games one of the best experiences out there, but it's tough times now as the Caps got eliminated first round with Stanley Cup aspirations. I go to a lot of road games for hockey, basketball, baseball, and football and the percentage of passionate fans there trumps DC in every city I've visited. The Nationals home opener was easily 60% Philly fans, there was the MNF debacle of when PIT Steelers fans overtook Fedex, and the Wizards are lucky to get much of anyone to show up.

However, to determine an Ultimate Sports City we don’t need to necessarily only talk about mainstream sports. Mike from the stellar Navy blog The Birddog Blog describes DC as a unique city that embraces a different aspect of the city:

Washington DC is a unique, and very underrated, sports city. To understand what makes it so special, you have to understand a little about the makeup of the city in general. DC, with its large government, military, and international presence, has a varied and transient population.

The result of this wide influence of cultures and perspectives is an equally wide-ranging sporting community, both for spectators and participants alike. Like rugby? The Cherry Blossom tounament has featured the best college and club teams from around the country for 45 years. Rowing? On any given Saturday morning in the spring, local high schools and colleges host regattas on the Potomac. Running? The Marine Corps Marathon is one of the nation's most popular. This is all on top of an already thriving professional and college sports landscape.

The large Central and South American population give DC United soccer games an environment unlike any other in MLS. Soccer's popularity in the DC area made it an ideal site for Olympic matches in 1984 and 1996, the 1994 World Cup, and friendlies between some of the world's top clubs. For golf, Congressional Country Club hosts a regular PGA Tour stop, the AT&T National, and will host its 4th major championship when the US Open is played there in 2011...Maybe the best part of the DC sports scene is how it features the entire spectrum of college athletics. Maryland gives the city a BCS football presence, while the area also hosts a bowl game and one-off special events like Virginia Tech-Boise State in 2010 and the Army-Navy game in 2011. The area also boasts some of college sports' most unique experiences, with both a service academy (Navy) and one of the nation's most prestigious HBCUs (Howard).

Basketball fans get a little bit of everything; elite ACC and Big East basketball, high-level mid-major basketball in the A-10 and CAA, plus the up-close-and-personal venues of the MEAC and the Patriot League. For something a little different, Maryland, Navy, and Georgetown also boast three of the nation's best lacrosse teams; lacrosse crowds of 10,000+ are not unusual at Navy-Marine Corps Memorial Stadium. There's something for every fan of every sport at every level in Washington.

The city has a well-rounded sports influence. But is it good enough?

It was Hoya Paranoia in the 1980’s as Georgetown was the team around the country. Ever see Boyz ‘N the Hood? Georgetown apparel is all over that movie and its set in LA. The teams during that era had Good Talent and a Bad Attitude.

Completely not sports-related but former Georgia Tech president Wayne Clough is the current Secretary of the Smithsonian Institute. May the power of the beard behold you!

The 1987 football season started off with a player’s strike and three weeks worth of Redskins’ games had to be played with replacements as the team was the only team who had no players cross the picket line. The Replacements won all three of those games and those victories are credited towards getting the Redskins into the playoffs and onward to a Super Bowl victory. It was this story that inspired the totally awesome Keanu Reeves movie The Replacements.

And finally, here's a clip of Stephon Marbury vs. Allen Iverson in a GT vs. Georgetown matchup in the NIT.

You've read the arguments, now YOU make the decision!