Share All sharing options for: The Ultimate Sporting City Debate: Denver vs. Beantown

Today we set the stage for one of our final first round matchups: Boston versus Denver. The 5/12 match up. Winfield chose Denver for this round so Denver's information will be following the jump...

Venues
Mile High Stadium has been known as a Denver feature for a long time. From 1948-2001 it was the home of the Denver Broncos and also hosted some minor league baseball teams. In 2001, a newer stadium was replaced by a newer venue Invesco Field at Mile High. The new stadium came under controversy immediately as many fans did not want their team and their stadium to fall victim to corporate sellout. In fact, for quite a few years the Denver Post refused to use the name Invesco when referencing the stadium.

The Pepsi Center is the home of both the Colorado Avalanche and the Denver Nuggets. The venue has hosted NCAA regional games as well as the NCAA Frozen Four.

The Fans of Denver
As far as we can tell, the fans of Denver demand excellence from all of their sports teams. Jay Cutler, Jake Plummer, Kyle Orton, and thirteen other quarterbacks have been essentially run out of town by the fans because they've failed to replicate the success of Elway. The fans are a fickle bunch and are about middle of the road as far as attendance is concerned in all sports. If the teams aren't winning, the fans don't show up.

Great Teams/ Sporting Moments
The Broncos have reached the Super Bowl six times but it was the 1997 and 1998 Super Bowl championship teams that will be remembered forever in the city. From the Mile High Salute, to John Elway and Terrell Davis, the Broncos had it all, including the debut of some pretty freakin’ sweet uniforms.

We will also throw Brian from BCI and furrer4heisman at Gobbler Country a bone. In 2004 and 2005 the University of Denver Pioneers won the NCAA hockey championship, bringing to the national championship total to 7 in the sport.

Great Individuals
Who is the only NFL player featured prominently on South Park that wasn't made out to be a complete ass or idiot? John Elway. Elway is a demigod in Denver. Elway holds every real Denver Broncos record: career offensive yardage, career touchdowns, career plays, and career winning percentage as a starter. Oh and he led the Broncos to their only two Super Bowl victories. Elway was inducted in to both College (2000) and NFL (2004) Halls of Fame. The 9 time Pro Bowler is still the oldest person to score a touchdown in a Super Bowl at 38.

Random Trivia
In 1976, Denver submitted a bid to host the Olympics and actually won. However, the city withdrew its submission. Denver is now the only city to have ever withdrawn its bid for the Olympics.

And finally, since we seem to have WWE mentions in every post, in 2008 the Pepsi Center had the infamous double-booking controversy involving the organization. In 2008, the Denver Nuggest and WWE were both scheduled to have events on May 25th. The Nuggets had a game against the Los Angeles Lakers in the Western Conference Finals and WWE had scheduled WWE RAW. Quite the uproar. In the words of Vince McMahon:

Even though the Denver Nuggets had a strong team this year and were projected to make the playoffs, obviously Nuggets and Pepsi Center owner Stan Kroenke did not have enough faith in his own team to hold the May 25 date for a potential playoff game.

Alright, thanks Winfield. You're such a sweetie. Now, sit down in that chair right there and let Boston show you how it's done. 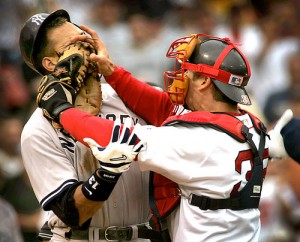 ...Can watch an MLB game at the most iconic stadium in all of baseball, Fenway Park (and the Red Sox are relevant now because they’ve won, unlike those jokers that play on the north side of Chicago).

Fenway was built from 1911-1912 and is the oldest Major League Baseball stadium still in use. According to Bostonians, the park's location amidst the urban setting has led to renovations that make the park incredibly unique such as the "Green Monster", "Pesky's Pole", and the "Triangle". A trip to Fenway Park for fans of baseball is a trip to holy ground (unless you're a Yankees fan).

The Fans of Boston
I've dealt with Boston fans only sparingly within the City Limits. Unfortunately for BC and other collegiate fans, they were less interested in the college football game being played in front of them than the Red Sox game that hadn't even started. Boston cares very little for its collegiate sports despite being home to the last 3 college hockey national champions.

If you're talking pro sports, Brian retorts that Boston is home to...

The City of Boston also features events for the sports-minded individual. The Boston Marathon has run every year since 1897 and is the world's oldest continuous marathon.

Great Teams/Sporting Moments
Once again, I'm going to defer to Brian. He seems to cover all of the bases in his bullet points:

Home of arguably the most dominant franchise in NBA history (Boston Celtics)... New England Patriots were the team of the decade in the NFL... Boston is THE city for hockey. Home of one of the original six NHL franchises...While Boston College is the only D-I football game in town, Boston is home to more colleges and universities than any other city in North America. This environment lends itself well to a number of great inter-city collegiate sport rivalries, including BC-BU in hockey, the annual Beanpot tournament and the Head of the Charles (the largest 2-day collegiate regatta in the world)...In the 2000’s Boston’s professional sports teams had arguable the most successful decade in sports history, winning 6 championships (3 by the Patriots, 2 by the Red Sox, and 1 by the Celtics), and 3 National Championships in NCAA men’s ice hockey (BC)...And finally, as an aside, for all your readers who are going to vote for Atlanta, show some respect to where your Atlanta Braves came from...

Brian would've probably formatted it more attractively had he known it would be in this format so please cut him a break for my personal overuse of ellipsis.

Great Individuals
Winfield wants to play the Quarterback Game. We can do that in Boston, too. 3 Grey Cup Championships. 1998 NFL Comeback Player of the Year. 6 Time Most Outstanding CFL Player. 1983 Liberty Bowl MVP. However, all of these awards pale in comparison to the 1984 Heisman Trophy. Doug Flutie is the unanimous pick to be on Boston College's Mount Rushmore. After leaving BC as a senior, Flutie was the all time passing leader in college football history. And since everyone generally hates Miami, here's a clip that any good college football fan can enjoy:

Two other interesting Boston-area draftees are Eddie McAshan (drafted by 1973 Patriots) and Scott Sisson (drafted by the 1993 Patriots). Eddie was Tech's first African American scholarship athlete and the first African American QB to start for a major Southern university. Sisson kicked the game winner over UVA that pole vaulted Tech in the 1990 rankings and led to our eventual 1990 National Championship.