Share All sharing options for: 2010 ACC and SEC Football Offensives

I've always been a pretty big history guy, particularly American history. A common illustration in any good history work is the battlefield map indicating offensive movements, defensive positions, battlefield locations, and major geographic features in the area. Over the past couple years, I've made a few battlefield maps showing the movements of ACC and SEC teams throughout the Southeast because the struggle between the ACC and SEC for recruits, fans, and media revenue is a war. Here's 2008's battlefield map: 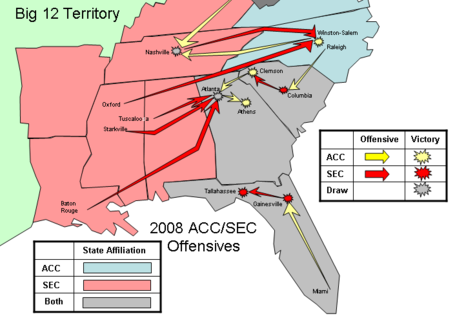 I'll give you a quick rundown of the map. It indicates the origin of the offensive team (base of the arrow), the location of the game site (point of the arrow), who won the battle, and what conference affiliate made the attack traveled to this site. There are some cities such as Atlanta where both conferences won games so a city like Atlanta would be designated a "draw". The gray states are states in which ACC and SEC schools reside, red states are only SEC teams, and blue states are ACC only. The 2008 and proceeding 2009 maps include bowl games: 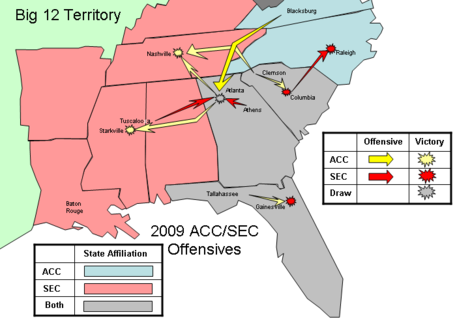 Notice the theme? Everything sort of funnels towards Atlanta. The Georgia Dome and Georgia Tech have become focal points for SEC incursions in neutral/ACC country. It's definitely attributable to a combination of traditional rivalries and recruiting. The 2010 map shows us the same sort of action. Teams wanting a piece of the ATL pie: 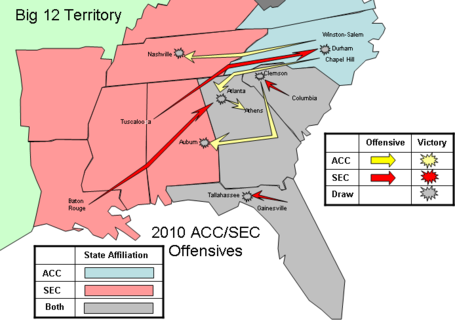 Any thoughts? Did I miss a game or two in there? What ACC-SEC game are you most interested in watching?