Share All sharing options for: Looking at the 2nd half of opposing QB's for the 2010 season

Yesterday we talked about the first half of quarterbacks the Yellow Jackets defense will face in 2010. Today, we look at the second half of the season. Just as the schedule is back-loaded, so are the quarterbacks.

If you missed last year’s New Orleans Bowl you missed a great show put on by MTSU’s quarterback Dwight Dasher. He returns this year as a senior and flaunts abilities also found in Pat White and Vince Young. Fast, flexible, and tough, Dasher threw for 2789 yards and ran for 1154 yards in 2009, leading the team in both categories. Easily.

Many people may be overlooking the Blue Raiders. However, they could be considered a relative up and coming team and Dasher could lead the way for a sneak attack upon the Jackets.

We have to think of two scenarios when it comes to Clemson: The Tigers with Kyle Parker and the Tigers without Kyle Parker. It all depends on what happens to him come the MLB Draft in June.  Let’s review Kyle Parker’s performances against Georgia Tech:

If Kyle Parker doesn’t start for Clemson, who will be the starter? Who knows. Willy Korn transferred and then the other players who ever passed last year were Jacoby Ford and CJ Spiller. Both gone and play other positions anyways. Clemson, good luck with that other QB.

Who knows who else Fear Factor: MINIMAL

Another dual threat QB but he struggles through the proper passing progression patterns. The Jackets contained him rather well on October 17th of last year. He put together a 10-14 passing game and mixed in 63 yards of rushing. His ability to break away and just run with it can cause quite the defensive stress. Many of his passes were completed towards the end when the Hokies finally started running some no huddle offense that we obviously could not control. Should VPI drop into that strategy early, we’ll be in for a battle.

Ah, Jacorry Harris. The Jackets had better have their targets set on you the way you lobbed balls over our heads like it was nothing. 20 for 25 passing for 3 TDs will make any opposing fans upset after they drove through the night just to see a Thursday night loss in Miami 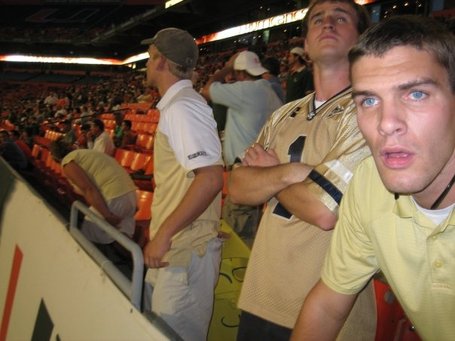 One can argue that the Tech game was Miami’s, and Jacorry’s, highlight. He didn’t have a game similar to Tech’s until six weeks later at Wake Forest.

We had no reason to fear Joe Cox last year and didn't. We should have feared their running game. Currently, the bulldogs list freshman Aaron Murray as the first string quarterback. Any quarterback who starts the game against the Jackets at the end of the season will be battle tested by this point, be it a freshman with no previous experience, or Logan Gray, the embattled Joe Cox backup who decided not to transfer out of Athens.

No one knows what to expect out of the QB position over in Athens. They just feel some sort of hope. But who really knows….

In summary, teams with returning starters:

Teams without returning starters/ OMG no idea what's going on!