As the battlefield cools between the Clevelanders and Louisianans, we take a reprieve from the Grandest of Tournaments to look upon our primary focus: college football.

Conference Realignment
BCI has run a pretty good sequence of pieces on the realignment issue. I guess it makes sense since BC is right in the middle of all the action. For all we know, those crazy New Englanders are scheming with those crazy Midwesterners to create some super duper 30 team conference. Personally, I think expansion will occur for conferences short of 12 teams but it will be mostly picking and choosing Big East teams in order to avoid upsetting the balance of major BCS conferences.

Gailey Returns
The Bills fans that I know are either excited because they don't know any better or wondering who the next coach of the Bills will be. Chan Gailey tends to disagree. He's predicting a Miami Dolphins-esque turn around for the Bills. I don't see it. The QB situation is rough and the team hasn't had the coaching stability to build a solid foundation. "Gailey" is NFL speak for "interim."

Television and the Orange Bowl
As we all know, FedEx bailed on the Orange Bowl. Apparently, Reese's is in talks to be the new sponsor for $20 million/season. This brings up some questions as to why FedEx dumped the ACC and friend Orange Bowl game. Jeff and Brian think the ACC is worth some pretty pennies when it comes to TV money and according to some great work at Tomahawk Nation several ACC teams outperform bowl game average ratings. This leads us to conclude that FedEx was just looking to bail 'cause they're cutting back. A quick look at their stocks shows rebound from the '09 stock crash but they've still not quite rebounded to 2007 levels.

Football Stuff
Gobbler Country is pretty much the only VT blogger I check anymore. This is why. The most concerning statistic to me is that the Real Tech will be the third worst team in terms of returning OL starts. Not a good sign. 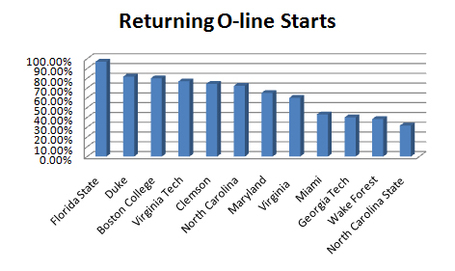 One more linkage from Gobbler Country shows us some preseason rankings. CBS ranked us 13th. Schlabach put Tech at a lowly #22. Andy Staples says Tech is good for at least at 15th place in his preseason poll. The AJC's Tony Barnhart agrees with Staples.