In a vicious move late last night, the city of Cleveland, Ohio snuck up and sliced Cincinnati's throat and claimed the last and final spot in the Ultimate Sporting City Debate. Therefore, Bird and I discuss New Orleans, LA vs. Cleveland, OH. First, Bird talks NOLA. Then I talk Cleveland. Ready? GO!

You can't talk New Orleans sports without talking about the Sporting Flagship of the city: the Louisiana Superdome. This sports town was destroyed in the wake of Hurricane Katrina but was reborn inside the Dome on September 25, 2006 in front of a Monday Night Football audience of 14.9 million people. The Dome is steeped in athletic tradition as it has hosted more Super Bowls than any other venue (6), plays host to the Sugar Bowl (America's second oldest bowl game), and has also hosted four college hoops Final Fours.

The People of New Orleans 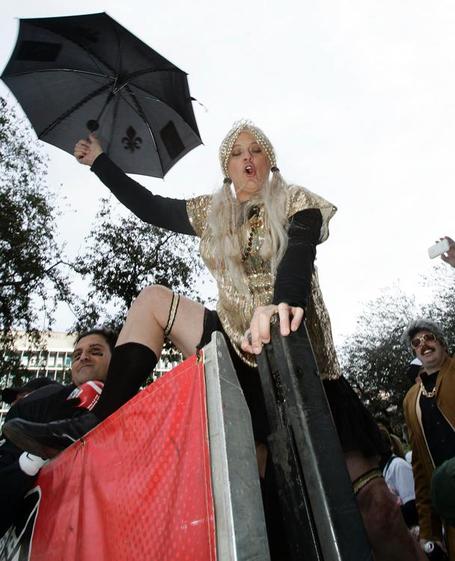 In New Orleans, when your team goes to the Super Bowl you dress like a woman.

The New Orleans fans are probably tired of hearing about their story of destruction, rebuilding, and rise but this is really what seems to be the common thread amongst so many Saints fans' mantras. The teams of New Orleans have never been good. Sure, they had Archie and Pat Swilling but for the most part the City has endured decades of sports futility. Yet, through the missed PATs after ridiculous hook and ladders and the "Aints" paper bag heads and the Jazz leaving the City, the fans have endured.

The fans really are the guy who was always the best friend who got his heart cut out continuously as his hot chick friend kept going after losers. And boy did that hot chick go after some real losers (Jim Haslett/Bum Phillips). The good friend in this story, however, became the boyfriend and his patience, only equaled by his obsessive fervor, actually paid off. The best friend who got the "hot chick" (Sean Payton/Drew Brees/Chris Paul) is the New Orleans fan.

There's no disputing the greatest team in New Orleans history. The 2009 Saints went 13-0 before losing their first game. This set a new NFC record for consecutive wins to open a season since the AFL-NFL merger. There were 5 Pro Bowlers on the Super Bowl winning roster including superstar quarterback Drew Brees.

From 1974-1979, the New Orleans Jazz were the City's NBA franchise. Due to conflicts with the Big Easy mostly related to venue locations, the Jazz left New Orleans for Utah. A franchise didn't return until 2002 in the form of the transplanted Charlotte Hornets. The best season for the New Orleans Hornets was Chris Paul's junior season in which the Hornets won the Division in 2007-2008 and defeated the Mavs in the first round of the playoffs eventually falling to the Spurs in the second round.

The Manning Clan makes its home in New Orleans. Peyton and Eli grew up watching their father, Archie, play for the Saints from 1971-1982. That's 13 Pro Bowl selections from one family. I consider that an impressive feat. Other famous individuals include Avery Johnson (former coach of the Dallas Mavericks), Marshall Faulk (NFL), Clyde Drexler (NBA), and Reggie Wayne (NFL).

Five current members of the SEC have as many SEC football titles as the Tulane Green Wave (a team that departed the SEC in 1966). The Green Wave won the SEC in 1934, 1939, and 1949. Kentucky, Mississippi St., South Carolina, Vanderbilt, and Arkansas have only combined for 3 total titles since 1933 despite the Green Wave spotting these 5 universities 43 more years of play.

Ok, so now we know about New Orleans. But what about Cleveland? What makes them a unique sporting city?

The Indians and Browns shared stadiums, Municipal Stadium, until 1995 when the original franchise was snuck out of town to Baltimore. Since the new franchise and same name came back, the Browns have played in Cleveland Browns Stadium.

The Indians play in a newer stadium as well in Jacob Field Progressive Field (built in 1994), it always provides a fun atmosphere. In 2007, the stadium hosted the MLB All-Star Game. The Indians have played in 2 World Series since the Field’s opening in 1995 and 1997. Progressive Field at one point held the longest sell-out record (455 games) until it was broken in 2008. This is just one illustration example of Cleveland’s strong sporting fan base.

The People of Cleveland

What makes Cleveland such a great sporting city is its people. The city’s fanbase is rabid. In the mid-1990’s, the Cleveland Indians owned the longest consectuive sellout streak. The record wasn’t broken until 2008. In football, the Browns have a special section of fans that have survived two separate Cleveland Browns franchises in what is dubbed "The Dawg Pound", one of the more intense groups of fans in the NFL. ESPN has called the city "The Most Tortured [Sports] City" in 2004, largely because of the absolute sports passion for the city mixed with the lack of championships in any of the major sports. In summary, the people of Cleveland live and die with their sports teams.

Great Teams/Sporting Moments
It can be argued that Cleveland is a losing city who just can’t seem to get it 100% correct and win a championship. However, the city does have its moments that it can claim as special and those that brought the fanbase and the team together as a whole. 1995 brought back the Cleveland excitement as the team went from 6th place in 1993, a strike ended season in 1994, to World Series contenders in 1995 with a record of 100-44, the first time in the World Series since 1954. In 1997, the Indians returned to the World Series again. During this streak of baseball success, the Indian enjoyed a 455 game sellout streak.

One cannot mention Cleveland without also mentioning Lebron James. Since the Akron-born player joined the Cavaliers in 2003 at the age of 18, the franchise has soared to new heights both in the regular and post seasons. Additionally, James was recently announced the 2009-2010 season MVP, his 2nd award and only the 10th player to win multiple MVPs.

It may be hard to believe but Manny Ramierez did at one point play for the Indians. He also was not very fat. Stupid yes. Fat no. 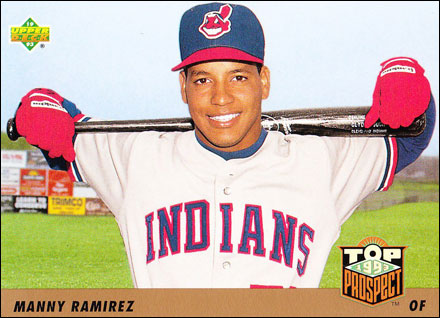 Manny, back in the day

Additionally, while Georgia Tech will always be known as the stomping grounds of John Heisman, Cleveland can claim his birthplace. Heisman was born in Cleveland in 1869. A few other rather famous athletes call Cleveland their hometown including Jesse Owens, Cy Young, and more recently British Open winner Ben Curtis.

Larry Doby of the Cleveland Indians was the first black player in the American League in 1947. My great grandfather was offered money to play for the Indians in the 1920’s. He declined because he was making more money in the grocery business. Instead, he played in an amateur league where the city title was decided in front of over 100,000 fans who came out simply for their love of the game.

Alright so the arguments are on the table. Who is a better sporting city and who advances? Cleveland, Ohio or New Orleans, LA?