The Seeding for the Ultimate Sporting City Debate

Share All sharing options for: The Seeding for the Ultimate Sporting City Debate

After evaluating a multitude of criteria, Winfield and myself came up with the following 16+1 cities for our tournament to determine the Greatest Sports City of America. The first criteria was the city had to possess three out of the four major sports franchises. The second criteria was that the city had to possess a major college hoops or football program since we are a college blog. Not having major college programs knocked San Diego, Oakland, and St. Louis from consideration. We came to the conclusion that Cal-Berkeley doesn't consider itself a part of the Oakland area, rather a separate entity, while residents in Boulder, Ann Arbor, and Tempe had more affinity towards their neighboring metropolises.

Two cities didn't meet our criteria but were deemed worthy of the debate by Winfield and myself: New Orleans and Cincinnati. New Orleans has hosted 9 Super Bowls (second most by a city) and hosts the second oldest bowl game in college football (Sugar Bowl). Cincinnati hosts the Bearcats, of course, but also was the traditional location of Major League Baseball's opening day until the WWL started broadcasting a Sunday Night game before Cincinnati's first home game. And since neither New Orleans or Cincinnati met the original criteria, they will have to play a play-in game against one another in order to face the #1 seed in the opening round.

The format will be simple. Winfield will choose a city and I will choose a city. We will explain to you why that particular city deserves to be America's Greatest Sports Town and you will vote at the end of the article to determine which city moves on. Winfield and myself have contacted over 60 bloggers from all across America to comment on their home cities' sporting interests, championships, and events. We will quote these bloggers and direct you to additional information as the tournament progresses. Here's the bracket: 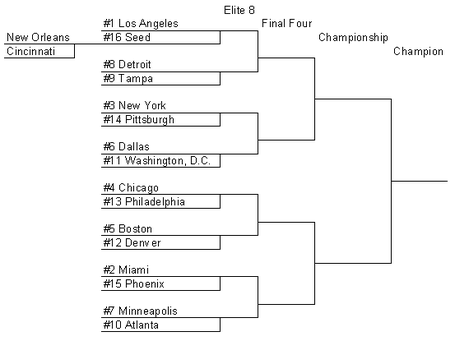