The best swords are forged in the hottest fires...

Share All sharing options for: The best swords are forged in the hottest fires...

Duke won it all. The ACC won its twelfth national championship overall. This is the eighth ACC title since expansion to 64 teams (1985). No other conference is close to this total. Here's the final tournament record of all the conferences this season:

The ACC and Big 10 tied for overall winning percentage. I think the ACC deserves a little more credit as we were seeded like a bunch of college hoops vagabonds. The ACC averaged the second worst seeding of all the power conferences in this tournament with an average seeding of 6.67. Six other conferences were seeded, on average, higher than us: the Big East (3.75), Horizon League (5.00), Big 12 (5.17), Big 10 (5.20), Atlantic 10 (5.67), and SEC (5.25). This bugs me because the ACC had to play so many freakin' power conference teams in the early rounds. The ACC had to play 10 inter-power conference games (winning 6 of them). The Big 12, Big East, and Big 10 only had to play 6. The SEC and Pac 10 only played 4. Hopefully, the selection committee will give us more credit next year especially considering we've produced the past two freakin' national champions. Here's the histograph of Duke's rise to ultimate glory: 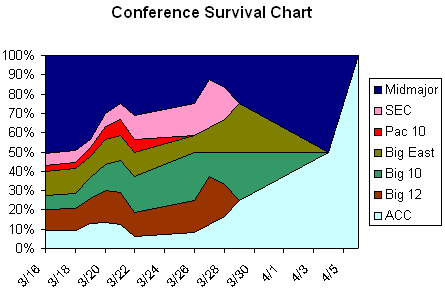 What did you think about the Title game last night and the overall tournament?