Tech bats are ready for battle

Share All sharing options for: Tech bats are ready for battle

Tech was the first team to reach 100 runs in ACC play this year. The Danny Halls have racked up 135 runs in ACC play to be precise. This is 37.8% more than the second most runs scored in ACC play (Clemson at 98). As Winfield said to me yesterday, "Dude, we're swingin' like crazy!"

Tech's leading the ACC in homers, runs scored, batting percentage, slugging percentage, hits, on base percentage... You get the picture. However, the greatness doesn't end with the bats. Tech's pitching staff is solid with three strong pitchers for the critical weekend series and adept defenders in the field. Defensively, we're the second best ERA in the league and the second best fielding percentage in the league. The hitting will carry us to the post season while the solid defense will win us games in the post season.

What makes the UVA series so interesting is that UVA has been playing great defense in ACC games. UVA has played Clemson, NC State, FSU, and BC. Those four teams allow about 6.19 runs per conference game (excluding the UVA series). UVA is scoring 6.25 runs per game in ACC play so not far off that previously stated mark. The UVA trump card, as I mentioned, is their defense. Those four UVA opponents average about 6.72 runs per ACC game. UVA has only allowed 4.25 runs/game in ACC play. They're trimming two and a half runs from teams' scoring averages per game.

If we compare this to Tech, Tech's offense is racking up about 3.83 more runs per game than our ACC competition has allowed on the season while our defense is holding teams to just under their ACC scoring average (excluding the Tech series). Here's a quick look at the ACC overall winning percentages (OW%) and ACC series winning percentages (SW%) of the twelve. 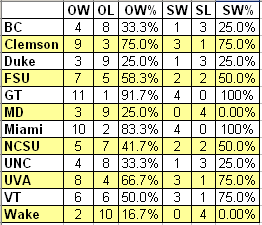 Tech's game tonight is at home against Kennesaw State. First pitch is at 6:00PM. Radio is WREK 91.1.