Like yesterday, we're gonna try and break a little bit of the 3-4 defense apart every other day or so. Today, I wanted to look at some new terminology for those accustomed to the basic 4-3 Sam (strongside), Will (weakside), and Mike (middle) linebackers of the 4-3.

A good Jack backer, with a solid understanding, will generally line up just off the line and be an edge rusher. Depending upon opposition tendencies and abilities of the Sam/Will, he’ll be opposite one of these guys. What generally happens is you find two LBs that can play in traffic, get through the wash and make tackles in a phone booth and keep them in the middle. The Jack’s a "semi-dedicated" rush guy and the 4th is a versatile guy who is comfortable in coverage and rushing the QB.


Essentially, the Jack will be rushing more often than the Sam or Will. I feel like I should explain strongside and weakside real quick for those unfamiliar with these terms. Strongside means the side where the tight end is lined up or whichever side an off-centered fullback is in the backfield while weakside is the opposing side. The point is to distinguish the likely point of attack (side with the fullback or tight end lead blocking). This is a dynamic term as a player can change from weakside to strongside after presnap motions as well. The only really fixed term would be Jack, as our defense is typically set prior to the snap. Check out the diagram: 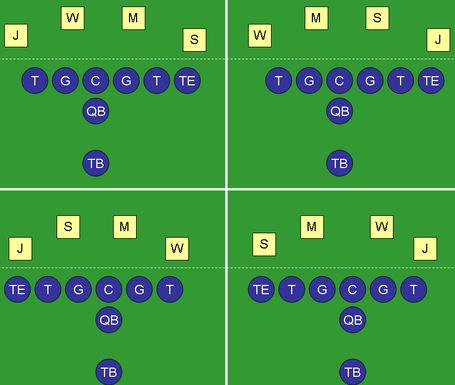 And as In the Bleachers points out, Al Groh doesn't necessarily send a Jack backer every time:

The positive is anyone from Groh’s system can become the 4th rusher and that’s what scares OLs, OCs, QBs and RBs. They can’t ID blitzers or threats as readily because any of the remaining 8 guys can be the 4th rusher. While its normally the Jack, Groh isn’t above adding an ILB, the opposite OLB, Safeties or Corners to the party.


I sent out a feeler to Georgia Tech bloggers to see what kind of depth chart has been shaking out as of early Spring Practice. Barrel of Rum told me that the first two practices have seen the same starting lineup with a lot of competition at safety. Here's a quick look at our defense as of the second spring practice courtesy of Barrel of Rum:

This depth chart accounts for 62.7% of our starts last season. On the first team, we've got just over fifty percent of the starts accounted for already. The two deeps account for about 12.6% of the starts on defense last season particularly in the secondary. We should definitely see a huge improvement in the secondary's performance simply because they've all finally had game experience and an offseason to reflect.