Share All sharing options for: How has Tech fared defending NBA talent?

Lately, I've gotten a few requests from NBA team blogs to get some in depth information about Gani Lawal and Derrick Favors in build up to the June 24th NBA Draft. One of the first stats I started pulling was how Tech has fared against NBA talent because it shows that our players face top tier competition on a regular basis and it compares our players to said top tier talent. 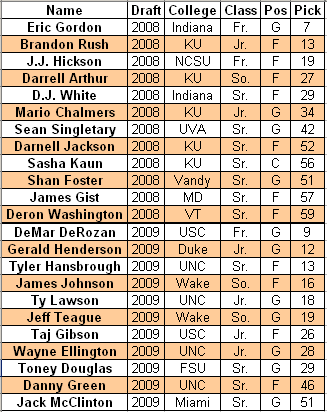 So here's what I found after pulling all of those guys season stats and their performances against Tech: 15 of the 23 shot worse from behind the arc against Tech, 15 of the 23 scored less points than their season average, and 14 of the 23 collected less assists when playing Tech. On the flip side, 15 of the 23 shot better overall and 14 of the 23 rebounded more efficiently. To me, this would indicate we had good guard defense and poor big man defense. Breaking our defense down by position shows that the average big man shot better and rebounded more efficiently against Tech than on average. The average guard only increased his statistics in assists per minute category.

Looking ahead to the 2010 NBA Draft, I think it's safe to assume that several Tech opponents will be drafted. A quick run down of most mock drafts indicate Al-Farouq Aminu, Ed Davis, James Anderson, Solomon Alabi, Evan Turner, Dwayne Collins, Greivis Vasquez, Trevor Booker, and Jon Scheyer will be taken in the 2010 Draft. The table below indicates how each of these potential draftees performed against Tech with respect to their season average stats (net field goal %, net 3 point %, net rebounds/game, net assist:turnover ratio, and net points per game). So for example, Jon Scheyer shot 13% worse behind the arc against us than he did on the entire season but scored 1.8 more points per game against us than his season average. 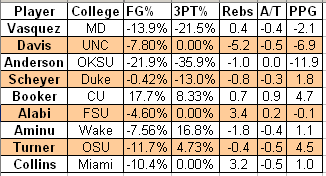 As you can see, there are few guys who'd like to play Tech more often (Trevor Booker) and some guys who really didn't play well against us (James Anderson). What do you think? Is it Paul Hewitt's coaching philosophy or favorable match ups? Where do you think Gani and Derrick will go in the Draft?