Share All sharing options for: TV Exposure for GT Football

I remember my freshman year's football season at Tech vividly. Reggie Ball was a true freshman. Chan Gailey had settled in to college coaching finally. Tenuta's defense was starting to take form. We beat Auburn. I listened to Wes Durham call three games on the radio that season. That's the most complete games I've ever listened to on the radio in a single season just because of how much television exposure Georgia Tech receives now-a-days. And when I went back and looked at the schedules, 2003 was the only season in the past 10 or 11 years in which Tech's games weren't televised over half of the time. Television is taking over. I still try to listen to the radio for games as much as possible. To me, there's nothing better than listening to Wes Durham on the computer over a DVR-delayed ESPN game.

Concerning exposure, however, I wanted to look at how much television exposure Tech has received since 1999 (oldest tv schedule I could find on rw.com). After digging through 11 old schedules, I found ABC to be Tech's favorite television destination. We've been on ABC 36 times over the past 11 years (3.27 times/per season). The second most was ESPN with 29 appearances for Tech. Here's a quick run down of all the channels Tech's played on and our winning percentage on each channel since 1999: 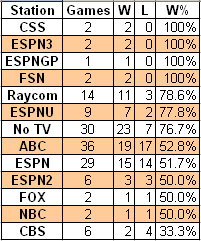 The easiest observation to make from the table is that we play good opponents on CBS, ESPN, NBC, or Fox versus playing jobbers on Raycom, CSS, or ESPNU. Another interesting observation is that if you consider all of our appearances on the major stations as national telecasts, GT has racked up over 270 hours on "semi-national" television from our football team since 1999. That can't be bad for a school's notoriety. Add in the highlight reels and you're talking about a lot of publicity.

The final table I was gonna throw at you is the breakdown per year of each station and its relationship with GT Football. I've also got the most important stat of 'em all: percent of games televised versus percent of games not televised. And for your information, my freshman year was the worst of the bunch at only 46.2% of games on TV... 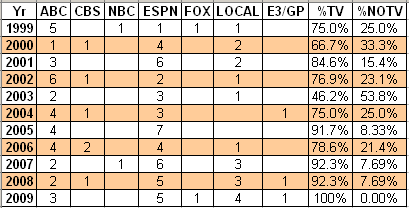