Who were our best football rivals each decade?

Share All sharing options for: Who were our best football rivals each decade?

The most common phrase uttered by commentators during a Clemson-Georgia Tech football game is something along the lines of, "The Clemson-GT game has been decided by one possession 30 times out of 75 contests. Since 1990, the game has been decided by 5 points or fewer 16 times out 21 contests." Today, I'm looking at the idea that margin of victory determines the quality of a rivalry. And by "rivalry," I'm referring to a series that lasts longer than a mere home-home series. Therefore, all of the teams I'll be referring to are former independents, SEC, or ACC squads that have played lengthy series.

The first thing I did was I truncated the entire football history of GT down to 1950-present. I felt like that would encompass the GT fan-hood of at least 99% of our readers. Then, I broke that data set into decades: the 50's, 60's, 70's, 80's, 90's, and 00's. I removed teams that only played a limited set of games against us (e.g. bowl opponents or random home-home series). And finally, I pulled out the records in those decades and average margin of victory within those decades to create this chart of Georgia Tech's 23 biggest rivals since 1950: 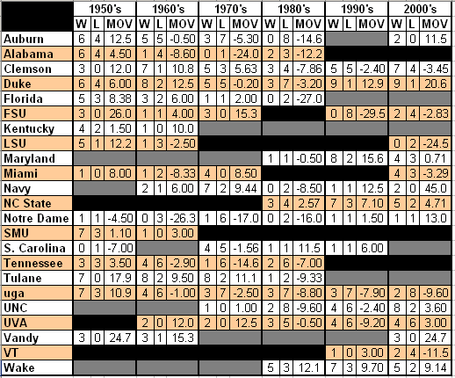 The list is a pretty big chunk of the major players in the Southeast as it includes 10 current ACC members, 9 current SEC squads, Notre Dame, Navy, SMU, and Tulane. Boston College didn't quite make the cut as we've only played them sparingly since 1972.

There aren't many surprises in this list of rivals except Maryland coming is as the most exciting rival in the 2000's. In retrospect, however, all of the recent Maryland games have been nail biters. The average margin of victory in the 2000's was less than one point. And not surprisingly, the Clemson game since 1990 has an average margin of victory of just under 3 points.

What do you think? How should rivalries be rated? Tradition? Passion? Proximity? Win/Loss Record?