To me, the NFL is the best sport on television. I'll admit the gameday atmosphere is lacking compared to CFB but it's still a wonderful sport to watch on tv because of the precision, the speed, and the stars. We're a few days from the NFL Draft and I like random statistics so here are some stats for you inspired by a recent post by Falcoholic brickcheney. Based on position and NFL performance, 10 of the last 17 Tech players were taken too late in the Draft, 2 of them were taken at the exact right time, and only 5 were overrated.

I went through the Gailey Era NFL Drafts and sorted the players picked by position. This gave me a percentile of where the Tech players were selected based on position. So, if there were 4 safeties drafted in the 2010 Draft and Chris in Indy was drafted as the 3rd overall safety, he'd be in the 25th percentile of safeties taken. Then, he went on to be a Pro Bowler while the other guys all got cut, I'd rate him in the 100th percentile based on performance. I left special teamers and rookies out (sorry Durant Brooks). The chart columns are Name, Overall Pick #, Position, Draft Rank at Position, Total Drafted at Position, Draft Percentile, Performance Percentile, and Over/Underrated?. 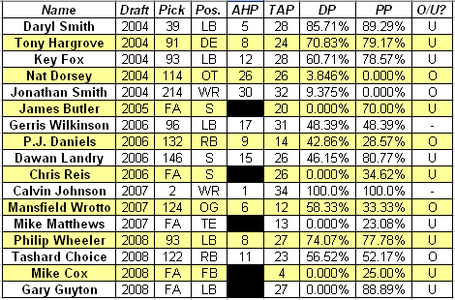 Calvin Johnson is the best wide receiver in his Draft Class. I don't care what Vikings fans say about Sidney Rice or Giants fans smacking their gums about Steve Smith (the Pro Bowlers from that Draft). Calvin is the face of the Lions franchise and really is the only competent talent in the entire City of Detroit.

Deuce has the unfortunate moniker of most overrated active Tech draftee. He suffers from being amongst a really great group of running backs and Tim Hightower was drafted after him. I feel Hightower has contributed just a bit more for the Cardinals than Choice has for the Cowboys up to this point. The debate would have to be whether or not you think Choice has outperformed Darren McFadden. McFadden is a bust compared to other RB's in his Draft but has he outperformed Choice? I'd say they're on par. After next season, the "overrated" status may change as Deuce becomes a bigger leader in the locker room and on the field.

The biggest mistake made by NFL GM's concerning Tech men was not selecting Gary Guyton at all in the Draft as he's outperformed 24 of the 27 linebackers taken ahead of him in 2008 (including Philip Wheeler). I gave Wesley Woodyard, Jerod Mayo, and Curtis Lofton the nod over Guyton as they all racked up a few more starts and tackles since their rookie seasons. If Guyton had been drafted as the 4th best linebacker, he would've been picked at 45th overall by the Lions instead of Jordon Dizon (a special teams rent-a-bum from Colorado).

What do y'all think? Why are Tech players continually underrated? How do they seem to consistently outperform their Draft position? Was it Chan Gailey?