Share All sharing options for: Paul Hewitt Era by the Numbers: Part III

Earlier in the season, I pulled up data on Hewitt's matchups with opposing ACC coaches during his tenure. I also compared Hewitt's numbers in the NCAA tournament to opposing ACC coaches. Today, I'm looking at the one positive that is Paul Hewitt. Supposedly, he's a great recruiter. To me, the best indicator of overall talent is the respective pro league's draft (in this case the NBA Draft). So here's a quick overview of some NBA Draft figures since the 2001 Draft: 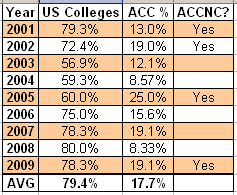 Basically, there were 58 draft picks from 2001-2003. There were 59 total picks in 2004 because of the introduction of the Charlotte Bobcats. And 2005-present, there have been 60 picks. So, the U.S. Colleges column indicates how many kids came from U.S. NCAA or NAIA affiliated schools in that year's Draft. The spike in the 2006 Draft college attendees was from the ineligibility of high school seniors (implementation of one year rule).

The next column (ACC %) is the percentage of college attendees drafted who went to ACC schools. Miami and BC had kids drafted in their pre-ACC days so those particular players were not counted for the ACC total. The final column indicates if UNC, Duke, or Maryland won a national title and flooded the Draft with picks.

Whenever we talk to opposing blogs during Q/A's, they generally bring up that they respect Paul Hewitt as a recruiter but not as a coach. Since Hewitt's time at Tech he's had 5 Draft picks (4 were his own recruits...). If we exclude BC, Miami, and VT, this figure would put Hewitt at 5th best out of 9 teams during his tenure. UNC has 13 picks, Duke 12, Maryland has had 6 picks, FSU and Wake have had 5 picks, and GT is tied with FSU and Wake at 5. UVA, Clemson, and NC State bring up the rear with 6 total picks. If we compared the number of Hewitt draft picks to all of the Division I schools, he would be tied for 19th out of 300+ schools.

The table above shows all of the schools with more draft picks than Paul Hewitt over his run at GT. It also shows that talent wins as those teams generally have more NCAA berths, Final 4 appearances, and National Titles. 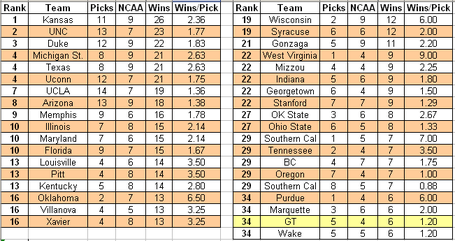 This table, to me, is more indicative of how good a coach is. The table above shows how many NCAA tournament wins schools have racked up since 2001. I also added a column called "Wins/Pick", which shows how much bang we got for each NBA draftee. Basically, it states how efficient a school's talent has been. Is it a small sample size? Yes. Does it stretch over multiple coaching tenures at many of the schools? Yes. The point is more so to compare GT to our competition. And as an additional note, the average is ~2 tournament wins per draft pick across all of CBB.

Let me know what you think.