Paul Hewitt, we have given up on you

Share All sharing options for: Paul Hewitt, we have given up on you

Georgia Tech basketball is in a state of disarray and Paul Hewitt has lost all control of what little he had remaining over the squad. The fanbase is apathetic and has turned its back on the program. Virginia Tech, if not the final straw, was one of the last for the ticket holders. Hewitt was booed during pre-game and the AMC was empty during the final minute and a half because we have given up. Too many times I have been asked: "is it bad that I want to see us lose so that it's yet another strike against Paul Hewitt?" I know I shouldn't but I want to reply: "No".

The future is in question. Don't believe the "young team" excuses. Gani Lawal himself: "We’ve got a veteran team. I don’t buy that [about being "young"]. Yes, we’ve got young guys, but we’re a veteran team." We were experienced. We were talented. The season opened again with the infamous word, potential. What we didn't get was the realization and production of that potential.  What we didn't get was coaching.

The worst thing to happen to Paul Hewitt was Paul Johnson. With Chan Gailey swimming in mediocrity it was easy for Hewitt to maintain the basketball status quo as long as he did something that made it seem like we were doing something worthwhile. We never looked at the basketball numbers too deeply because we were all grumbling about the king sport of football. And now, football has begun to meet expectations and our gaze has turned to Paul Hewitt, the man who can't win on the road and has a continuous rollover contract with an Athletic Association already in debt. 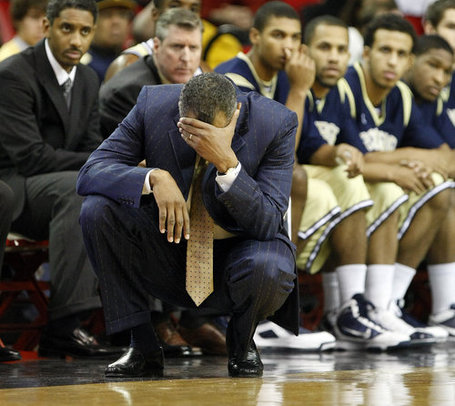 One time, ONE TIME! have we had a winning conference record in TEN YEARS, and have never been a Top 3 seed in the conference tournament. In 2003-2004, we went 9-7. That season is quickly becoming an infamous historical fluke. Hewitt may be the recruiter, but he has lost his handle on being the COACH. I can throw out more stats, more numbers, and sub-par records he has accumulated but it will just make me angry and sad at our completely helpless situation. At this point, I don't even think Bird can disagree with me: PAUL HEWITT HAS TO GO.