Share All sharing options for: Giving credit to the first Tech ACC QB's 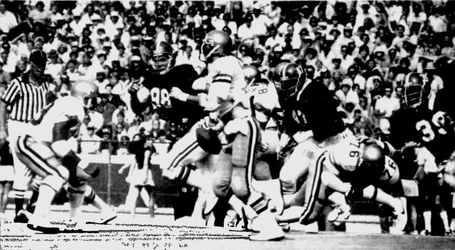 If there's one thing I enjoy more than crunching football stats, it's looking up old football stories in newspaper archives. You can find a lot of cool stuff in old newspapers and now-a-days a lot of papers are digitizing their archives so a google search might turn up some info you thought was lost forever. I was looking at this list on wikipedia and decided to read up on Tech's rocky start in the ACC with a particular emphasis on quarterbacks.

Let me be the first to say that I have gained a whole lot of respect for those old Tech QB's. Based on the newspaper articles I dug up, our offensive lines were terrible. Every other week was, "Bill Curry announced X QB is starting in place of injured Mike Kelley." It also didn't help that we were playing Notre Dame, Alabama, and a slew of other programs in their prime.

I kinda get the vibe that the Mike Kelley Era (1978-1981) was considered an era of little QB controversy yet four different QB's were called upon because of injuries to the starter (including one of Tech's most famous alums Ken Whisenhunt). Like I said, I have boatloads of respect for Mike Kelley, Stu Rogers, Ted Peeples, and the Whiz.

From 1978-1981, we were transitioning between the waning fad of the wishbone to the veer as we were entering the ACC. Then, Pepper Rogers got fired. Bill Curry implemented a whole new pro style offense that all of our QB's had to learn and we sucked. Mike Kelley missed nine games due to injury during Bill Curry's first two years and we only won two freakin' games. Stu Rogers has the worst record ever for a GT QB that started 10 games or more at Tech. He was 0-10 as a replacement during the 1980, 1981, and 1983 seasons. That's tough sledding.

Now, there is a light at the end of the tunnel. Kelley was drafted in the 6th round by the Atlanta Falcons. He saw limited action and was eventually cut by the Dirty Birds. However, he is still the only Tech quarterback to have started an NFL game as a quarterback during the Super Bowl Era (1966-present). He started for the San Diego Chargers in one game in 1987. Who was Kelley's QB coach at Tech? The architect of the last Duke football ACC title, Steve Spurrier.

Now, to show how far Tech football has come since 1978, here's a breakdown of starting QB's winning percentages based on games they started in: 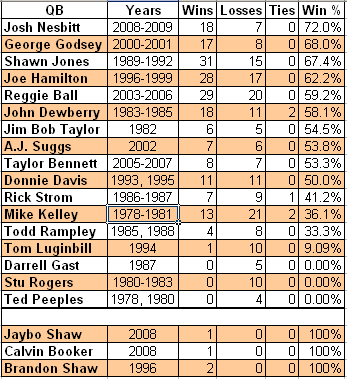 I also wanted to see how GT has improved its status in the ACC as time has progressed. Check out this chart. It shows our ACC total win percentage over time: 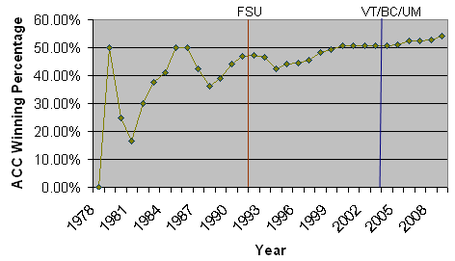 I also put together an interesting table that shows GT's relationship to the ACC teams prior to joining the ACC. Before joining the ACC, Tech played 46 ACC games from 1953-1977 as an out of conference opponent for Clemson, North Carolina, Virginia, and Duke. Here's a breakdown of Tech's winning percentage against teams in the ACC all time (I removed all pre-ACC data): 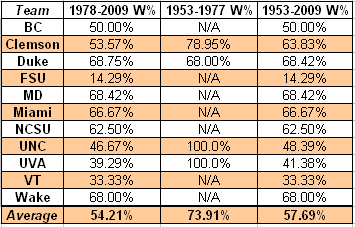 If I made a mistake or you can fill us in on more details about the early ACC Tech QB's, feel free to comment.