Basics of the 3-4 Defense

Share All sharing options for: Basics of the 3-4 Defense 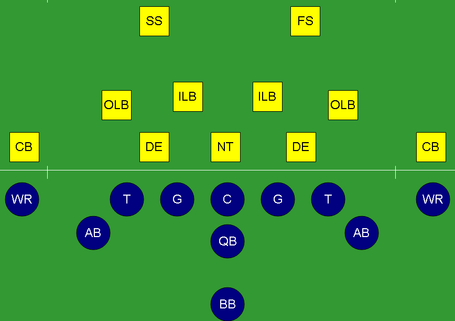 A reader mentioned yesterday that he'd like to see some information about our new defensive scheme: the 3-4. So we're gonna start breaking down the 3-4 defense in build up to the season. Today, I'm just gonna go over the basic differences of the 3-4 when compared to the 4-3. For all intensive purposes, I'm ignoring the secondary today as it's almost identical to what we're used to seeing in a basic 4-3 scheme.

The primary difference in the two defensive schemes is obviously the basic defensive alignment. Instead of utilizing four defensive linemen (two tackles and two ends), Al Groh will institute a three man front (two ends and one nose tackle). The nose tackle is typically lined up over center, which is called "0 technique." And unlike the 4-3 defense in which defensive ends are expected to apply pressure to the quarterback and rack up sacks, defensive ends in the 3-4 are expected to control their gaps and occupy blockers thus freeing up the linebackers to make plays. The gap assignments are shown in the diagram: 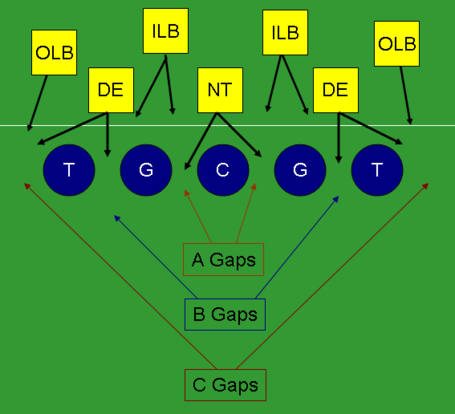 The goal is to ensure that there are two men assigned to every gap in case a lead blocker eliminates the proverbial first responder. The defensive linemen and inside linebackers have two gaps while the outside linebackers are assigned to the outside C gaps. Of course, there are infinite variations on the gap assignments based on blitzes, coverages, and offensive alignments. The key to the Groh-fense will ultimately fall on the athleticism and block shedding ability of our linebackers.

The four linebackers add elements of speed and surprise to the 3-4 defense. Al Groh routinely blitzed his outside linebackers like stand up defensive ends in order to confuse opposing quarterbacks. The compacted three man front gives the outside linebackers a shorter and possibly unblocked path to the quarterback when compared to a blitzing linebacker in a 4-3 defense. The loss of a defensive lineman means that teams will be tempted to run against Tech and the Groh-fense. We will have to survive a trial by fire against Georgie, VT, and Clemson next season as they seem almost excited to run two to three tight ends against us. If the down linemen cannot tie up 4-5 blockers on every play, the 3-4 is doomed.

Below is a chart illustrating the change we're gonna be expecting from our LB play. It's tackles for loss data pulled from Wommack's defense the last two seasons at Tech versus Groh's last two seasons at UVA. The noticeable difference is that linebackers in the Groh-fense make a higher percentage of the TFL and sacks than they would in Wommack's 4-2-5/4-3. Check out the charts: 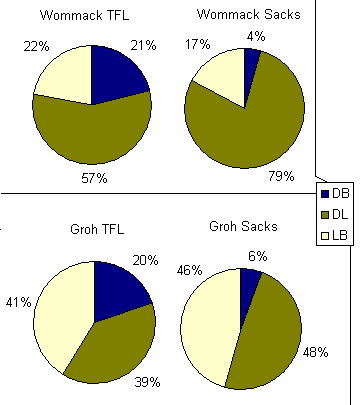 Concerning size and shape of 3-4 defenders, there are some differences. The nose tackle needs to be a monster. A chronic problem for Groh's defense last season was the relatively small nose tackles (John-Kevin Dolce at 245 lbs and Nick Jenkins at 285). The nose tackle will be an athletic 300 pounder and this is tough to find in the pros let alone in college. Defensive ends are bigger than the typical rush ends seen in 4-3 defenses. As I mentioned, they are encouraged to get into the backfield but are more so encouraged to tie up multiple blockers and free up linebackers. Therefore, a defensive end in the 3-4 should be about the same size as what we saw in our 4-3 defensive tackles in previous seasons. The inside and outside linebacker physical traits will vary based on the personnel available to Groh this season but based on Groh's previous defenses look for linebackers in the 220-250 pound range.

Edit: For additional reading check out these articles: