Duke is the ninth ACC rep in the Final Four since expansion to 65 teams in 2001. Two conferences were snuffed out in Elite 8 play: the SEC and the Big 12. Now, only three power conferences remain and surprisingly enough a midmajor. The Big 10 has clinched at least a share of the tournament winning percentage title. If Michigan State loses in the semis and Dukes wins out, then the ACC and Big 10 will tie with a 9-5 overall record (64.3%).

As I mentioned, the SEC and Big 12 flames were extinguished in rather inglorious fashion over the weekend. The National title Vegas favorite (after Kansas' departure), Kentucky, laid an egg and Baylor was no match for Duke's offensive rebounding ability. The Midmajor conferences have one lone wolf remaining from their original wolf pack of 33. 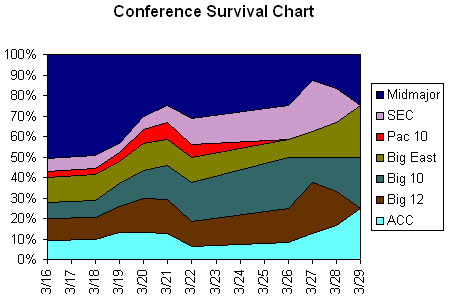 With Duke's victory against Baylor, the Blue Devils enter the Final Four, in my opinion, as the favorites to take it all. The 2009-2010 Duke squad is the ninth ACC squad to enter the Final Four since 2001's expansion. This same era has seen three other ACC schools entertain Final Four audiences - Tech, Maryland, and UNC. The Big 10 and Big 12 also have sent four different schools to the Final Four in this time span. The Big East has sent a remarkable 7 teams but only one has been twice in that span (UConn). The table below shows major conferences broken down by national titles since '01, final four teams since '01, and final four schools since '01: