How did Derrick and Gani perform in wins versus losses

Share All sharing options for: How did Derrick and Gani perform in wins versus losses

I always like to double check myself on stuff. The other day I said that Gani and Derrick performed the same in losses as they did in victory and that next season hinged on guard play. Today, I'm double checking my sweeping generalization of their performances. First, here's a look at Gani and Derrick's efficiencies in wins versus losses: 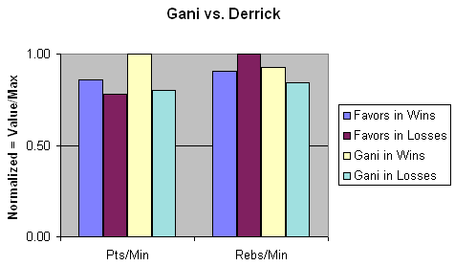 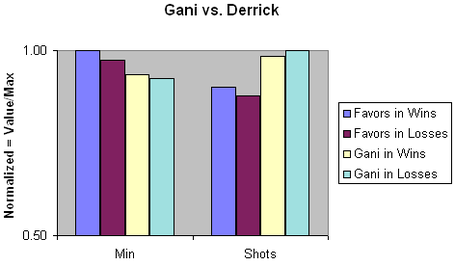 There was only one counter-intuitive stat, to me, in that grouping. Derrick was about 10% more efficient at rebounding during losses than in victories. Otherwise, all of the other stats showed that as Derrick and Gani performed so went the team particularly with regards to points/minute.

The next chart is a graph of Gani and Derrick's stats combined. I dubbed them the "Big 2" in this chart. This chart kinda shows us the importance of a sometimes overlooked stat: blocks/game. Gani and Derrick racked up about 24% more blocks/game in victory than they did in losses. Of course, we played a lot of lesser competition wit inferior front courts so this is definitely a factor. 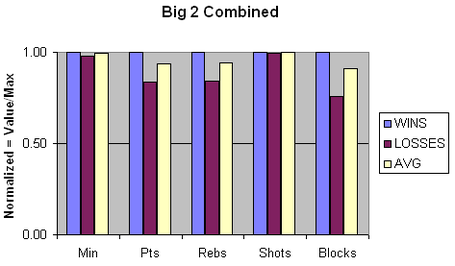 The final chart is kinda the most important of them all. It's sort of like looking down the barrel of the what-we're-gonna-be-missin'-next-year gun. The Big 2, on average, played about 26-27% of our team's total minutes but they racked up a lot of stats playing in that quarter of time. The final chart instead of being a bunch of normalized values simply shows what percentage of the team's overall stats Gani and Derrick contributed in the 2009-2010 season. For example, they played for 27% of the total minutes in victories and racked up 71% of the team's blocks in victories as well. 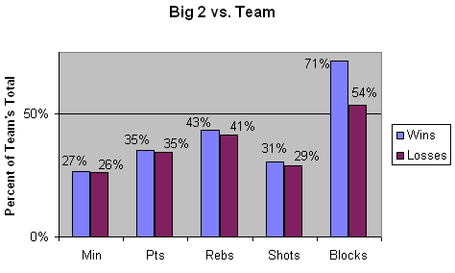 The sad part isn't the comparison of losses to wins but rather the sheer efficiency that we're losing with the possible departure of the Big 2. They racked up a metric ton of boards, blocks, and points for Tech this season and losing them both will put huge pressure on our back court next season.