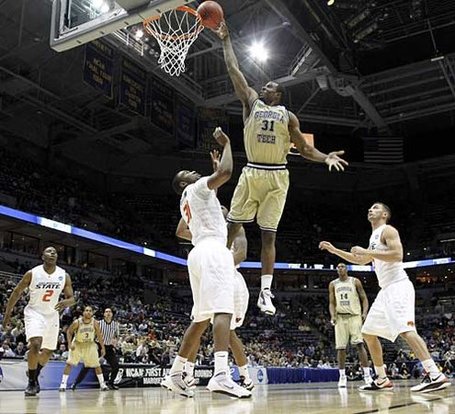 Maybe it was the cell phones all the time...

Iman Shumpert clamps down, and Tech steps boldly forward | Mark Bradley
Milwaukee -- These weren't the Jackets we'd come to know. These were different Jackets, different and better and more grown-up.

NCAA Tournament: Georgia Tech Remembers How To Shoot Free Throws...
Iman Shumpert had just nine points, but his four free throws in the final two-plus minutes of the contest helped 10th- seeded Georgia Tech take a 64-59 decision over seventh-seeded Oklahoma State in the opening round of the NCAA Tournament in the Midwest Region.

Jackets beat Cowboys to move into second round - Coley Harvey
Very rarely do players this time of year look back to the past for guidance. Typically, they are told to stay in the moment, glancing ever so casually at the future that lies ahead. Someone try telling that to Gani Lawal.