Size
The average OK State starter is 6'3" and about 200 pounds. The average Georgia Tech starter is 6'7" and 220 pounds. Four inches per player is a huge advantage for Tech against a guard heavy team like OK State. Look for a lot of blocked shots in the paint. I wouldn't be surprised to see Hewitt increase the offense's focus on getting the ball to Favors and Lawal.

Experience
The OK State squad boasts tournament and collegiate experience advantage over Tech. The average player Tech will face tonight has about 2.5 years of experience playing D-I ball. For comparison's sake, Tech will be fielding a team with about 2.2 years of D-I experience. Tech's roster only has two guys who went to our first round knockout in 2007 as freshmen while the Pokes are fielding a roster that returned 62.2% of their 2009 tournament minutes. 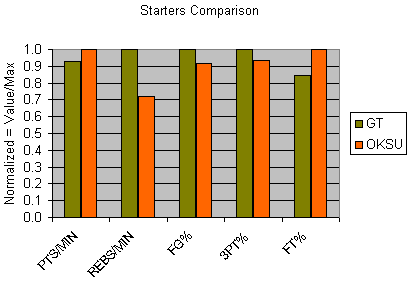 Offensively, Tech's starters have the hotter hand beyond the arc and are much better at grabbing boards. The OK State starters account for about 66.5% of the Pokes minutes so look for Tech to take advantage of Pokes weaker rebounding abilities.

Bench
Tech's bench accounts for about 41.7% of its total minutes. Moe Miller, Zach Peacock, and Brian Oliver add another dimension to our offense making Hewitt's squad difficult to prepare for. These three account for 61.3% of our bench minutes and 67.7% of our bench scoring. Mfon Udofia has seen his time almost completely erased. I don't expect to see Mfon but for 2-5 minutes in order to give Moe and Iman a break at 1.

The Cowpokes feature Nick Sidorakis, Roger Franklin, and most importantly Marshall Moses coming off the bench. Moses is the rebounding monster that the Pokes will need to compete with Tech on the glass. Moses is a 6'7" 240 pound tight end that is the only Cowpoke on par with Gani and Derrick's rebounding efficiency (~0.33 rebounds per minute played).

Predictions
I think Tech can play with anyone in the country. OK State can play with anyone in the country. This tournament has shown that no one is invincible and that the referees have chosen to take the tournament into their hands. The more physical teams may not be the teams that emerge. Finesse may be the name of the game and this doesn't bode well for a shot blocking, full court press team like Tech. I still think we've got some good mojo from the ACCT and we take the Pokes. For good measure, let's all reflect on 2004 and channel Will Bynum's spirit:

Let us know your thoughts.

Tedward edit! Respond to the poll below! Go Jackets!