The ACC and Big 10 were relatively inactive while the Big 12 showed us what we all knew at From the Rumble Seat - the Big 12 is tough. The Big East, as expected, fell on its face. To Hell with the Big East. They should've been 0-4 if not for some ridiculously cheap fouls called against Robert Morris. My personal wish list for the tournament now (not necessarily good for my bracket) is to see the entire SEC and Big East out by the 3rd round. Here's the conference win percentages thus far:

I didn't count Tennessee as an SEC team yesterday so I fixed that. I blame ESPN because they had multiple sources reporting only 3 SEC teams in the tournament. After hearing the "Jon Dwyer has zero career fumbles" stat several times on ESPN, I should've known to double check all of their stats.

Interesting stat o' the day. Midmajors beat eachother up in my chart above. So if you actually just counted the games midmajors played against Major conferences, the midmajors racked up a 4-6 record. Booyah. That's not too bad. Here's the updated conference survival percentages. Midmajors took a hit. The SEC and Big East took bigger hits. 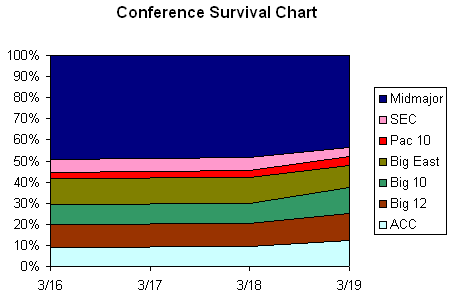