Share All sharing options for: Who are the OKSU Cowboys? The Q&A with Big12Hoops.com

1. Lost-style flashback.  Tech fans remember two names when they think of Oklahoma State: Eddie Sutton and John Lucas.  Sutton bashed Tech after the 2004 dramatic Tech victory, stating if the teams played in a series format, the Cowboys would've defeated Tech.  What is Eddie's legacy at OKSU?  How has the coaching style changed since Sutton's retirement?

Unfortunately Eddie Sutton’s legacy has been tarnished by his off the court actions.  On the court, Sutton coached solid teams, winning 5 conference regular season or tournament titles. He led the Cowboys to 2 Final Fours and 13 NCAA tournament appearances in 16 seasons in Stillwater. But what most people now remember is how he left the Ok State job after an admitted alcohol and pain killer induced auto accident. His son Sean took over his coaching chair, and also has been in the news recently for an arrest after trying to illegally obtain prescription medication through the mail. Needless to say, the Sutton name isn’t what it once was, which is a tragedy considering the elder Sutton is one of only 4 coaches to have 800 career coaching victories, winning more as a Cowboy than at any of his other gigs.

Since the Sutton departures, Travis Ford was introduced as the head coach last year and brings a similar style of play to Stillwater. The Cowboys are capable to running the floor and scoring in the 90s or playing a slow tempo half court style, scoring in the 60s and winning because of D.

2. John Lucas was the star of OKSU in 2004.  James Anderson is the star of this year's OKSU squad.  Can you give us a brief summary of Anderson's game?  What's the hype for Anderson going into this year's NBA Draft? 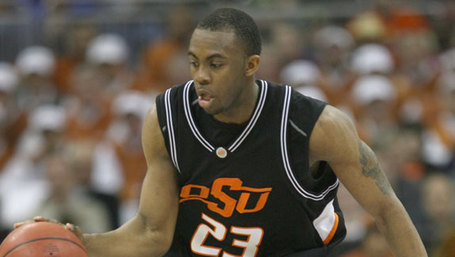 James Anderson was my runaway Big 12 Player of the Year. Bar none. He is a beast of a player. He is listed at 6-6 and is a difficult guy to guard. If you try and put one of your guards on him, he’ll shoot over top of them. If you put a forward on him, he’ll drive past them. He has that special combination of size, speed and skill that virtually makes him impossible to defend.

I have seen draft boards having him go anywhere from about 10 to 15 this year. I would think that is a fair analysis. In college he is an unstoppable 6-6 guard, but at the next level he’ll need to work on either his ball handling or outside shooting to make him a dominating force. Otherwise he is your typical 6-6 tweener. Don’t get me wrong I am about as Bullish on Anderson as anyone, but I do think he needs to improve these aspects to be an All Star-caliber player.


The Big 12 is the number one rated conference according to Jeff Sagrain and Real Time RPI and second in the land (behind the ACC) according to Ken Pom. The conference also started the season 114-1 at home. Needless to say it is a rough and brutal conference.

The top is obviously stacked, with the #1 overall seed in the NCAA tourney, plus 6 other schools who got dance cards. There has been some tail off, though, since the start of the season, most notably Texas who started 17-0 and was ranked #1 nationally, before falling incredibly hard to end up 24-9 and an 8 seed. None the less, the conference got a 1 seed, 2 seed (Kansas St), 3 seed (Baylor), 5 seed (Texas A&M), 7 seed (Ok State), 8 seed and 10 seed (Missouri).

It’s entirely possible for the conference to have 3 teams in the Final Four. KU is the obvious choice, but lots of people are high on Baylor and K-State’s guards change games. The other schools have all lost a step and might not see the second weekend.

Read the rest of the Q&A after The Jump!

4.  Tech boasts ACC rookie of the year Derrick Favors and all-ACC forward Gani Lawal.  Both players project as first round picks in the upcoming NBA Draft.  How does OKSU's front court stack up?


Oklahoma State’s big man is Matt Pilgrim. Pilgrim is the lone forward to get the start for Oklahoma State, with the other 4 starters listed as guards. Their other low post player Marshall Moses who averaged nearly as many rebounds (8.2) per game as points (8.9). The strength of OK State doesn’t lie in its low post guys though. Their top three scorers are all guards, although with Anderson (6-6) and Obi Muonelo (6-5), we are talking about big guards. Those two averaged 36 ppg. Throw diminutive PG Keiton Page into the mix and 46 of the squad’s 74 ppg come from those three guys.

5.  Paul Hewitt is often criticized by Tech fans for what we call Hotel Hewitt.  However, in tournament situations his constant substitutions and 8-10 man rotation seems to keep his full court press active.  What can you tell us about OKSU's backcourt depth behind Anderson?  Have they stepped up when Anderson is off?


WARNING: Keiton Page will annoy the hell out of you. He is a 5-9 guard who looks like he got lost on the way to his 7th grade game and ended up on the Cowboys bench through a series of flawed security checks. The other main guard, Obi Muonelo, is a solid hoopster in his won right and at 6-5 can use his size to his advantage, a lot like Anderson. Both of those guys can light it up when need be, like in Ok State’s first round Big 12 tournament game, where Anderson was limited and Page stepped up for 24 big ones. In order for Ok State to be effective, the other guards HAVE to be effective. As good as Anderson is, he can’t carry the team without a semblance of support from Muonleo and Page.

6. Tech delivered Duke one of its two ACC losses.  OKSU delivered Kansas its only Big 12 loss.  Who wins the battle between the Giant Killers and why?

In my Big 12 Conference Tournament Preview, I said that if you want to beat Ok State you should give Anderson his 25 points and concentrate on stopping the auxiliary players. The Big 12 tourney proved my point. In the first round vs Oklahoma, Anderson was held to 11 pts, but Keiton Page exploded for 24 points, in large part due to 5-8 shooting from 3. In the loss to KSU the following night, Anderson scored 27 and the Cowboys lost by 19 as nobody stepped up.

In their "Giant Killing" win vs. Kansas, Oklahoma State shot 60% from the field and 53% from behind the arch. Any team that does that can beat any other team. I don't expect that same sharp shooting out of the Cowboys in this one. The Wreck has the size and ability to play OKSU tough but for [the Cowboys] to win it will all come down to how Anderson's supporting cast responds. If they are there, the Cowboys will win. If not, Tech will advance.

Wow. Reading that prediction, maybe I should go into politics, eh? I guess if you had to put a gun to my head, and asked me for a winner, I’m going with Ok State… With all things equal, I am after all a Big 12 homer.

Special thanks to Evan from Big12Hoops.com!