A look back on Tech's Tournament seedings

Share All sharing options for: A look back on Tech's Tournament seedings

Tech's been to 2 Final Fours, 4 Elite Eights, and 7 Sweet Sixteens in its 15 tournament runs. Tech sports an overall tournament record of 22-15. The highest seedings we ever received were back to back two seeds from 1985-1986. Here's a quick run down of our seedings and finishes:

Fans of the program know that the biggest disappointment was the 1993 season. We were a four seed upset by thirteen seed Southern University (SU's greatest tournament win ever). A tournament that's memorable in the worst kind of way.

Tech's lowest seedings ever have been the two most recent tournaments as a 10 seed (2007 & 2010). I took the liberty of graphing Tech's seeding compared to its finish in the tournament over the past 15 berths to the NCAA tournament. You should see a nice little trend following the idea that the higher the seed, the more we should expect from our tournament run. 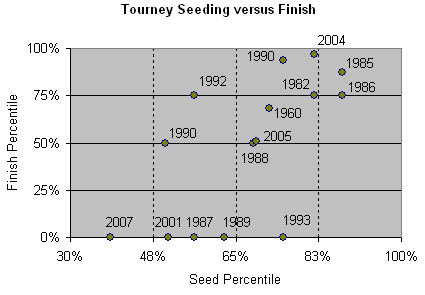