Danny Hall vs. the ACC

Share All sharing options for: Danny Hall vs. the ACC

In buildup to our first ACC series. I wanted to show everyone why Danny Hall (CDH) is the man. First, let's look at his total ACC winning percentage. He's 300-188-1 against the ACC all time. Hall only has a losing records against Clemson and Miami. Only 3 out of the 19 ACC head coaches he's faced have winning records against him all time. Here's a graph of his running winning percentage against current ACC teams since 1994 (Big East Miami and VT games counted): 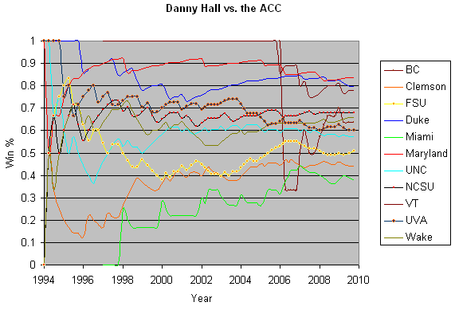 It's a big mess, I know. The key to reading it is finding a particular team you want to compare against Danny Hall and tracking the particular color. The next table is a table of ACC coaches Hall has faced and their winning percentages versus him: 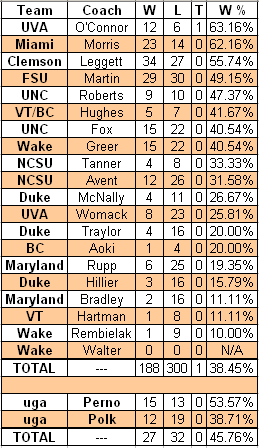 I threw in Georgie just for the heck of it.

Tech has played 146 ACC series since Danny Hall took over (including 7 Miami/VT pre-ACC series). Danny Hall's squad has won 85 of these series (factoring in ACCT/NCAAT games). 42 of those 85 season series were sweeps. Tech has only been swept 12 times by conference opponents. This totals out to an all time 85-49-12 series record for Hall against current ACC competition. Hall has faced two former ACC coaches, Steve Traylor (Duke) and Ray Tanner (NCSU). Hall's teams swept Traylor's Wofford squads in three meetings from 2002-2007. Tech split two series with Tanner's South Carolina squad, losing the 2002 meeting 1-2 while winning the 2005 rematch 2-1.

Wake Forest is 16-31 all time against Danny Hall. In 14 series meetings, the Deacons have only won 3 series. The Deacons are breaking in new head coach Tom Walter. Their previous head coach, Rick Rembielak, did not have his contract renewed after the 2009 season.