More fun with the 2010 football schedule

Share All sharing options for: More fun with the 2010 football schedule

Faithful reader Yakub2 pointed out to me the other day that four of our 2010 opponents are coming off of bye weeks leading up to our game. This fact intrigued me. Another FTRS lurker, Jerry J., asked me, "When was the last time we didn't have a home Thursday Night Game?" I looked it up and it was 2002, Chan's freshman year. We also missed out on Thursday Night Lights in 1998.

Odd segue time... Going back to Yakub's point, we are looking at a tough back end on our 2010 schedule. To illustrate the point, I made a graph showing the 2009 winning percentage of our 2010 schedule opponents. 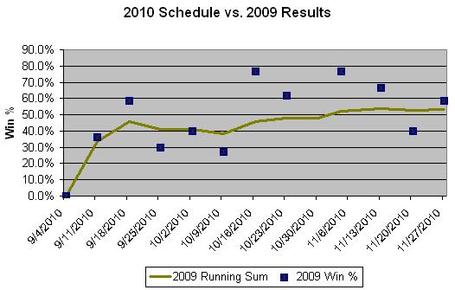 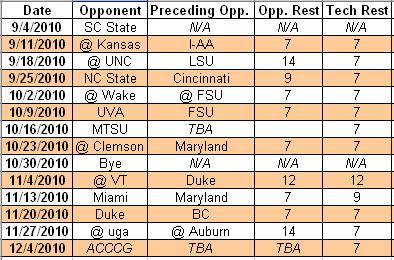 After looking at it from the Hokie perspective, I like our schedule. We don't take many breaks (like 2009) as we plow from game to game to game, which will probably hurt us along the lines in injuries. But we never have to cool down our offense. Our bye week is even cut short by a Thursday night danceoff in Blacksburg. The climaxing difficulty of the schedule makes each game even more critical as the season progresses. We'll be ranked higher from a soft start so our later, bigger games will have a higher likelihood of national television. It's almost too perfect.

Let me know your thoughts on this fine Sunday afternoon.