Yesterday, I tried to spin the ACC's worst free throw shooting effort into a positive for the Jackets. 99% of the readers didn't buy it. An elite few, however, proposed interesting conspiracies as to why free throw shooting goes South within Alexander Memorial Coliseum or when the Yellow Jackets come to town.

Today, I'm looking into the theory that our rims are abnormal compared to most arenas, which negates a teams' natural ability to shoot free throws (as proposed by readers Orang3B & GTBlogScott). The theory is interesting because what opposing coach would seriously question the rims of an opponent? Who would actually check to see if the rims were legit after an opposing coach complained?

So to start off, I broke down the free throw shooting of Tech and our opponents every year under Paul Hewitt. The rims can't be changed during the game so we know it's a level playing field as far as both teams having to use the rigged rims. The advantage is still Tech's as we know the rims are effed up and we can practice on weird rims. Here's a look at the shooting percentages over the years: 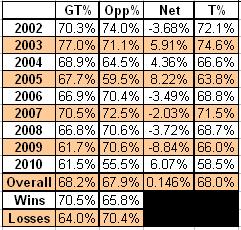 If the rims were installed in a particular year, it would be years under 68-71% free throw shooting as that's about average for all ACC teams during CPH's tenure. I'd say a good conspiracy theorist would argue we had rigged rims from 2004-2005 and from 2009-present. There are huge drops in free throw percentage over those periods for both Tech and our opponents.

The issue I have with this conspiracy is that it hurts Tech more than it helps us. We already are bad at shooting free throws. Why would we do this to ourselves? Solution: someone else is rigging our rims (or they've got someone on the inside in the GTAA). Who is benefitting from the rigged rims? Below is a table of ACC squads FT% at AMC, 2005-2010 conference play FT% (Hist%), difference between regular conference games and playing at AMC (Net), and winning percentage at AMC. I highlighted the possible culprit: 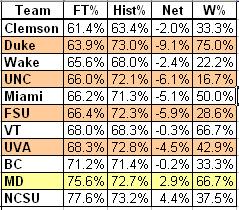 Maryland. Maryland is tampering with our rims with an insider. I declare Winfield and Ted in charge of rooting out the Maryland double agent. You call it paranoia. I call it presenting the facts.