This month, we are profiling the Yellow Jackets who have the best chances at getting drafted on the first day of the NFL draft for SBN. Today, we look at Morgan Burnett. 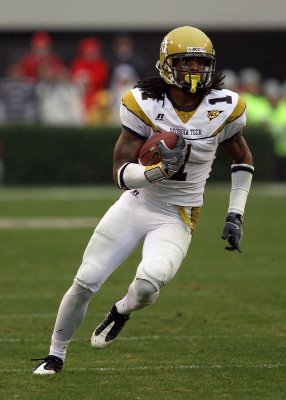 The twitter summary: Morgan Burnett is a safety who reeks of athleticism. He will sneak into your line of sight and rip the ball from you!.

Strengths: Quickness, good hands, and vision. In 2008, Burnett was tied for first in the nation in interceptions with 7. Morgan possesses lots of raw, athletic talent that has allowed him to play at multiple defensive positions when called on to do so.

Weaknesses: Over his tenure at Tech, Morgan has seemed to struggle while playing in zone coverage. Also, his strength needs some improvement. He often whiffs or arm tackles instead of making a fundamentally sound tackle. This didn't stop Burnett from leading the team in tackles over Paul Johnson's two year tenure.

NFL Draft Talk: Out of the 4 Yellow Jackets who all declared for the NFL Draft, he was the biggest surprise because of his "decline" from his sophomore season to his junior year  This has led to speculation that Morgan Burnett will not be a first-rounder. The majority of talk for Burnett seems to be a late 2nd-rounder. His team will be a team who is willing to hone and develop his raw talent and turn him into an NFL-quality defender. Most mock drafts see him as a mid-to-late 2nd round draft pick because he is athletic enough to play at the next level but lacks the discipline and fundamentals to be an immediate game changer.

Bradley breaks it down in the AJC.