Everyone loves to harp on CPH's teams and how they can't shoot the free throw. The one point shot evades Hewitt's players like Marques Hagans continually dodging Chris Reis in my recurring nightmares. However, there is something interesting about Hewitt's guys that's uncommon in the ACC. The GT players shore it up slightly on the road. Only five squads in the ACC shoot better on the road than they do at home (Duke, VT, NC State, FSU, and GT). My only speculation on NC State is that hostile crowds motivate them more than their coach. Here's a breakdown of the ACC's overall (T%), home (H%), and away (R%) free throw shooting (Net is away minus home): 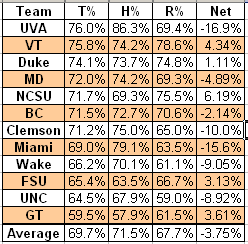 Another interesting fact is that Tech IS NOT THE WORST free throw shooting team on the road. UNC (59.0%) and Wake (61.1%) are worse than Tech (61.5%). Tech's mark is only -6.17% off the road mark for the average ACC road team. At home, ACC squads obviously shoot a much better clip (71.5%). The sad fact coming from this otherwise happy stat is that Tech shoots free throws better when people are screaming at them than when you can hear a mouse squeaking in AMC...

Brian at BCI loves to talk up the Boston College free throw defense. It's what he likes to hang his eagle talons on. However, I've recently learned through a little investigative blogging that Chestnut Hill isn't the best free throw defense in the ACC (they are 3rd best). Alexander Memorial Coliseum is the best by almost 4%. The Georgia Tech crowd, physical defense at home, and mystique of the Thriller Dome drives opposing free throw shooters into fits of inaccuracy. In fact, opponents shoot worse at Tech (55.5% on the season) than Tech does at home and we're the worst free throw shooting team in the ACC (57.9% on the season). The GT home court advantage is REAL. Here's a summation of the how all of the home court factors affect an ACC team's free throw shooting. The table also includes how that team shoots at home to show that because of GT's GREAT free throw defense, our horrible free throw offense is exonerated: 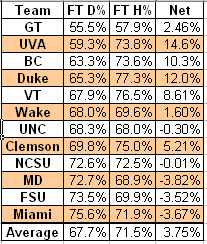 Miami's crowd allows teams to rack up an amazing 75.6% accuracy in Coral Gables. If Miami had GT's free throw defense, they would've limited opponents by about 4 points per game in Coral Gables.

Another important stat is that teams in the ACC shoot about 3.75% worse on the road than they do at home. To further illustrate GT's overall (not just home) free throw defense, I've attached the following table. GT is limiting teams to -5.44% free shooting on the season. We beat you down before you take your free shots. The ACC average free throw percentage is 69.7% while GT is the ACC worst at 59.5% but against GT, ACC teams shoot 64.6%. We docked teams by about 1 POINT PER GAME because of our great free throw shooting defense. 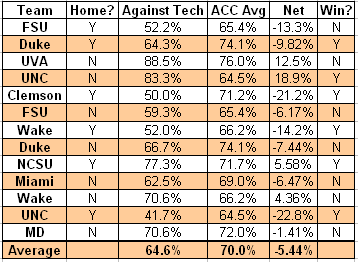 Doubters may call it luck. I call it a physical, pressing Hewitt defense that beats up opponents before they reach the charity stripe (no weak sh*t). I also would like to point out that we have a high percentage male crowd that is not afraid to throw the occasional insult or awkward comment at a free throw shooter for fear of alienating women-folk (I'm sure games at Agnes Scott are equally as awkward for visiting teams for the same yet opposite gender reasons). Opponents fear the Thriller Dome. Balls spin in the opposite direction in our rims (like toilet water in Australia). The free throw god does not shine upon Alexander Memorial Coliseum. Boston College, prepare yourself for the worst free throw shooting atmosphere in the ACC.

Also, as the de facto home for fans of America, From the Rumble Seat would like to wish good luck to Team U.S.A. as they take on the Swiss this afternoon at 3:00 PM on NBC. Don't eat Swiss cheese for the day.