This month, we are profiling the Yellow Jackets who have the best chances at getting drafted on the first day of the NFL draft for SBN. Today, we look at Jonathan Dwyer. 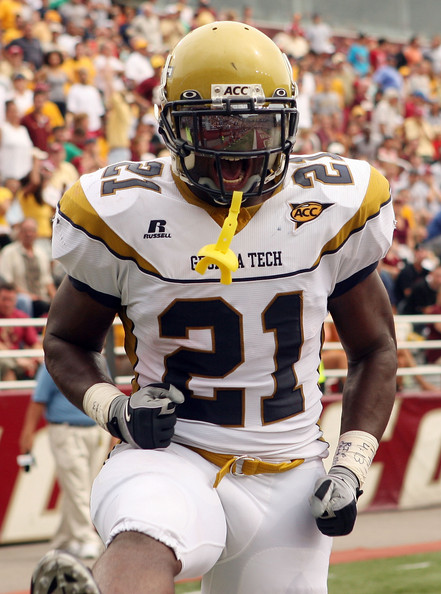 Position: B-Back aka Running Back

The twitter summary: JD is a power running back who has good speed and will knock you down for the count.

Strengths: Power and agility. Dwyer has a big lower body that allows him to push through the first tier of a defense or weak attempts at a tackle. He has good vision and uses it to find holes in the line and bust through them at opportune times. Dwyer maintains good speed and can be difficult to catch from behind in the open field.  And finally, once you give the ball to Jonathan Dwyer, you can bet the house that he will not lose it. Over his 3-year period at Tech, he touched the ball 554 times and only fumbled the ball five times.

Weaknesses: Yet again, it's the unknown with him. Paul Johnson's offenses thrive on running the ball. This mentality limited Dwyer's chances at showing off his receiving and pass blocking. Over his three years, he only caught the ball 15 times. Also because of Tech's lack of passing, it is virtually unknown as to where his pass-blocking abilities lie.

NFL Draft Talk: The word is that Dwyer has lost 17 pounds in preparation for the NFL Combine, only making his potential that much greater and more valuable to a team. He seems to be considered a late first-rounder which points to a good team which will hopefully mean TV time for us Tech fans. With LT's departure in San Diego, Dwyer's name is popping up all over the place including Mocking the Draft and Mel Kiper.