Did you watch that hockey game last night?

Share All sharing options for: Did you watch that hockey game last night?

America beat Canada for the first time in 50 years last night in hockey. A ridiculous drought that's almost comparable to Navy losing to Notre Dame 43 straight years...almost. A lot of the talking heads are talking about why the game was such a huge upset in terms of Canada's love of the sport and America's disinterest, the fact that Canada is ridiculously stacked, and the fact that America's team was put together 4 days prior to the Olympics. Now, America is the #1 seed in the hockey tourney...

After watching the game and listening to the commentators talk about the scale of the upset, I wanted to look deeper into it. I looked at the American roster and the Canadian roster. The first thing I confirmed was that there was a Boston College alum playing for America (so an ACC school is representing America). The next thing that I looked at was NHL salaries for the two squads. I wanted to line them up side by side... Here's the list of NHL salaries lined up by rank on their respective teams: 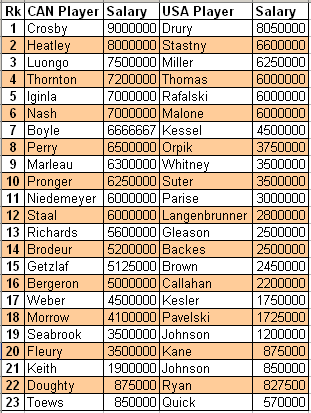 So looking at the salaries head to head gives you a little perspective but when you take the sum of the whole and the average of each team's NHL payroll, you kinda see where the term "upset" came from. Was it an epic America-Soviet Union-Greatest Upset-Of-All-Time? No. But it was definitely an upset. We had 62% of the Canadian payroll playing for us. It also didn't hurt that Ryan Miller was AMAZING.

Now, for all the other Southerners who hate hockey and other frozen things like ice cream, snowmen, and polar bears, here's another analogy. Essentially, the Boston Red Sox (123 million dollar payroll) just got knocked off by the Colorado Rockies (77 million dollar payroll). That's the level of upset we're talking about. Not huge but still something worth talking about the day after the game.

Wait, you don't like baseball. Alright let's compare these teams to the NBA. 2009-2010 scoring-wise, the Canadians have the NBA equivalents of Lebron James and Carmelo Anthony versus the American team having the NBA equivalents of Joe Johnson, Amar'e Stoudemire, and Carlos Boozer. Imagine any team led by Carmelo and Lebron getting knocked off by anything short of the Shaq-Kobe Lakers or Jordan-Pippen Bulls and you can kinda grasp the shock that's going through the Great White North.

What are your thoughts on this Pro America Monday? I figured we've got a week to break down the BC game and there are a few baseball games to talk about. Just wanted to take a break and feel a little patriotic.