We've officially reached the final quarter of ACC play. We've got a road trip to Maryland (5-0 at home), Boston College (1-5 on the road), road trip to Clemson (5-1 at home), and a finale against VT (2-3 on the road). The ACC is 48-18 at home this season. Road wins are at a huge premium. No team in the ACC has more than 3 road victories (Duke). Five teams have 2 road wins and five teams have 1 road win. Only Miami has failed to win away from home. UNC, BC, and NC State are the only teams with losing records at home.

If we were to look ahead at the remainder of the season, I'd say GT goes 2-2 and finishes 8-8 with two home wins and two road losses. However, that's not a very quantitative or objective method for determining ACCT seeding.

Let's go back to using the in conference win percentage as an indicator of how teams will finish out. Using this method, GT finishes 7-9 and is tied with UVA at the end of the season. With a loss to the Cavs, I gave the tiebreaker to UVA. This means GT is in the worst bracket. We'd be in the "Congratulations you won the #8/#9 seed game, now you play a well rested #1 Duke!" bracket. So, it's imperative that we finish strong. We've got to steal a game from Clemson (who currently has the toughest remaining schedule in the ACC). We've got to win out at home. 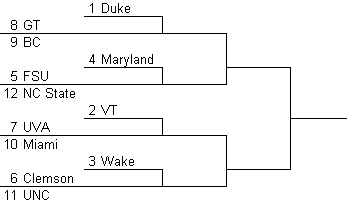 Just looking at the bracket for speculation purposes, I think we could beat any team in the ACC on a neutral court in a winner-take-all scenario. I just don't want to play Duke in the second round even if our first round matchup is BC. Hewitt's goal should be somewhere between a #8 and #5 seed. A first round bye is pretty much impossible now due to terrible losses to FSU, Miami, and UVA but if we can just creep up the ACC standings a little bit, I think we have a shot at the ACC finals and securing a healthy NCAA berth.

What do y'all think about the ACCT and beyond? Also, vote in the Hewitt poll! WOOO WE SWEPT UNC! Hewitt is now 0.500 or better against 5 current ACC coaches!

Do you approve of Paul Hewitt's job performance?

This poll is closed