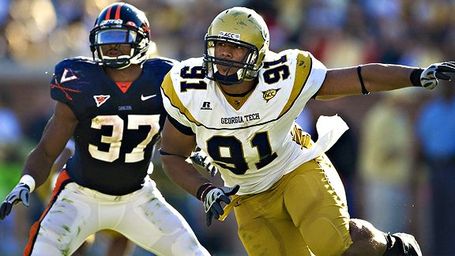 (3:24 PM) Spelling and Grammar errors should be fixed. Many apologies....

Strengths: Versatility and Power. Morgan is explosive off the end of the line and the opposing lineman will have his hands full. Once in the backfield, he has the ability to hustle, chase and throw down the quarterback. Derrick's game film will show that he plays hard and eats up 2-3 blockers on every play. Even on plays when he is double teamed, he still applies pressure, gets a TFL or a sack.

Weaknesses: Against some of the better competition (Iowa specifically), Derrick was neutralized. Foot speed and balance can also be causes for concern. There were a few times when Morgan made it through the line and was knocked down with ease. Despite this, some of his best tackles were made from his knees or by scissor kicks.

NFL Draft Talk: Many mock Drafts have Morgan easily going in the top 10 and quite possibly the top 5. The majority ranges from numbers 6-8 and we expect him and Carlos Dunlap to battle it out for the first defensive end pick.