Share All sharing options for: ACC Preseason Hype vs. On Field Excellence

Last year, I posted graphs after the 2009 Media Days displaying where the ACC coaches had predicted the ACC to stack up year-year since full expansion. I also contrasted these graphs with actual on the field results. What did we learn? FSU and Miami are always overrated coming in to the season. BC and Wake are always underrated. Buy BC and Wake, sell your ACC stocks South of the Okefenokee.

Factoring in 2009's on the field results, we see that BC on average has out performed the Coaches' predicted finish by two whole spots every year. They're always picked to finish 3rd to 4th but have finished 1st to 2nd in the division every year since full expansion. Interestingly, BC and Wake also have the widest margins of hype. They've both been predicted to finish as high as 2nd and as low as 6th in the Atlantic since 2005.

Ultimately, only one team has performed as well as expected season-season and that was Virginia Tech. The Hokies average predicted finish was 1.2 place in the Coastal and they finished around 1.4 place on average. They are a little overrated but no Media Days event has ever strayed from picking them to finish 1st or 2nd and the Hokies have yet to finish outside of those constraints (Duke is the only similar track record of predictability and that's not a compliment). 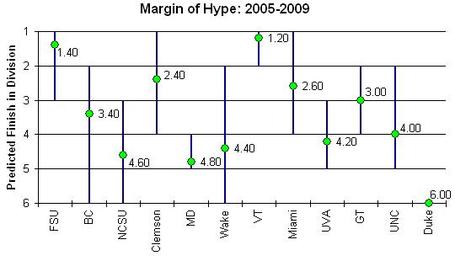 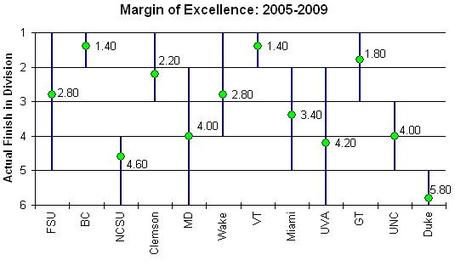