This ain't Air Force's first rodeo against a Paul Johnson coached team. Air Force faced off with Paul Johnson six times from 2002-2007 defeating him in 2002 but losing every time afterward by an average margin of 5.4 points. Paul Johnson's option offense accumulated over 0.9 miles of rushing yards against the Fighting Falcons from 2002-2007 meaning there isn't much the average Falcon defender hasn't seen from a CPJ attack.

Ken Niumatalolo is 2-1 against Air Force including Navy's first loss in the series since 2002. The Falcons managed to end their 7 game losing streak by limiting the big plays and scoring opportunities of Navy. The 6 points scored against Air Force was the lowest point total for a Navy offense since their October 14, 2006 game against Rutgers. This is why Tech fans should be concerned with the Air Force defense. 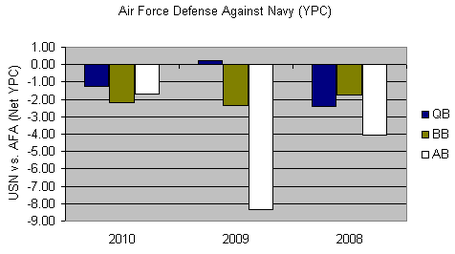 Besides the fact that Air Force is a motivated member of the proletariat taking on a member of the elite, Air Force has legit game experience against CPJ's option. They also run their own version of the option making their scout team a million times better than the average UNC or Virginia Tech scout team. And for all those wondering how long the game will take, the average Georgia Tech game in 2010 took 3 hours and 10 minutes. The Air Force-Navy game took 2 hours and 44 minutes. If you blink, you'll miss a quarter or two.