From the Rumble Seat 2010 in Review

Share All sharing options for: From the Rumble Seat 2010 in Review

The 2010 year started off with a bang followed by a resounding BCS thud, March Madness, college baseball, another football thud, and an engagement. Georgia Tech and FTRS creator Winfield started 2010 off right traveling to Miami for the Orange Bowl. A huge highlight for Winfield was the outpouring of support that fans gave to the Ramblin Reck as financial aid was required to help get the Reck to the Orange Bowl. We couldn't be more thankful for all of you who donated to the cause. It was a great success and all monies leftover were put right into the account solely dedicated for the car itself. Unfortunately, the financial support was about the only highlight as the game didn't go as planned. The Iowa blogs and fans flooded From the Rumble Seat in droves as we broke down Iowa in great detail. 508 comments during the Orange Bowl Open Thread is still a blog record for us.

After the Orange Bowl, Tech terminated its defensive coordinator and lost four players early to the NFL Draft. Derrick Morgan was taken in the first round alongside Demaryius Thomas. Demaryius Thomas definitely had some big shoes that were not filled in 2010. Morgan Burnett was taken in the second round. And Jonathan Dwyer was taken in the 6th round by the Steelers, which most Tech fans thought was due to his poor off-season conditioning and his failed drug tests (due to ADHD medication). Winfield considered this NFL Class the second best in the ACC.

Ted came on as our baseball and football recruiting expert. He added a new colorful dimension to our cast of characters that included a deep, resounding hatred of all things associated with Athens, Georgia. Ted's responses to Al Groh's hiring, Jaybo Shaw's transfer, and the Georgia Tech Spring Game were all great compliments to From the Rumble Seat's overall content. Ted's favorite bits while working with us were his two radio interviews. By far, Ted's joking on Clemson's Jack Leggett surpassed all of Ted's other content in terms of vitriol and venom received from opposing fans and coaches.

Tech fans were given a decent basketball season to enjoy. Derrick Favors and Gani Lawal highlighted Paul Hewitt's tournament-bound roster. Iman Shumpert was constantly compared to former Tech guards and still is. One of the more academic series was run in build up to the tournament. We interviewed Professor Joel Sokol of Georgia Tech's Industrial Engineering department (Part I, Part II, and Part III) in regards to his system used to predict March Madness. We also discovered that veterans were more dangerous against Hewitt's squad than greenhorns.

For some reason, we managed to squeeze in a ton of information about the 1970's Tech football teams. These teams alongside the 80's were probably some of the shakier teams in Tech history and their QB stats definitely reflected that fact. We broke down several games old games against Air Force and even interviewed a former Tech head coach in Pepper Rodgers.

The 2010 Baseball season had some great highs and was definitely marred with some downs. Sadly, Tech baseball is the 90's Bills of the NCAA Baseball Tournament and Tech eventually fell before CWS play again despite Danny Hall's incredible ACC resume.

In what was the defining post of the Summer and probably the biggest waste of time due to Detroit minions stuffing the ballot boxes, Winfield and myself conducted the "Greatest Sporting City in America" tournament-style debate. Detroit received over 50% of the vote, I believe, and ran away with the competition. ChrisInIndy defined the tournament's failure quite succinctly, "The fact that the Lions are there should automatically disqualify Motown from the competition." 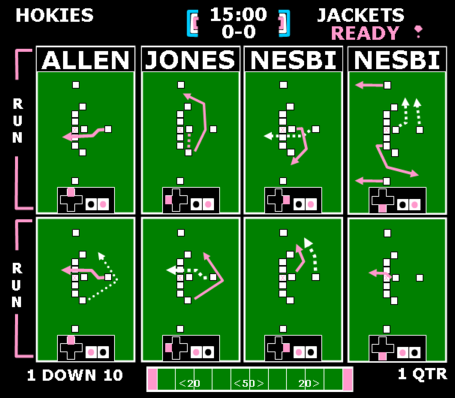 Another interesting headline of the Summer was the peak discussions of conference realignment. A cost breakdown shows how much gasoline and money could be saved if Tech joined a realigned SEC East. Stadium attendance would definitely no longer be an issue in the SEC, either.

Winfield and myself take great pride in our affiliation with the Ramblin' Reck so any time we get time to talk about our experiences, we do. This includes finding murals around Atlanta, discussing Ramblin' Reck history, celebrating anniversaries, or aiding in fund raising.

The days before football begin are always the longest. In July, we gave praise to our forefathers and we even broke down the Best Wins, Worst Losses, Best Losses, and Worst Wins of the 2000's. CraigT said it best when he said, "I’ll take the tie against Notre Dame thirty years ago, but not a loss. They are all bad." We asked several questions of the fans about Allen's ability to pick up where Dwyer left off, streaks that could be ended in 2010, and offensive line depth. A lot of those questions were answered in the worst possible way in 2010...

The football season didn't go quite as planned but we definitely had a good time conversing with bloggers from Rock Chalk Jayhawk, Tar Heel Fan, In The Bleachers, Backing the Pack, Riddick & Reynolds, Blogger So Dear, From Ol' Virginia, Go Middle.Com, The Key Play, Blue Devil Nation, Unbalanced Line, and the Bird Dog. Cal Golden Blogs worked with us on a great Tech history piece about the origins of Up with the White and Gold.

Thanks to all who contributed to the 2010 year. We look forward to providing you with the best Georgia Tech content on the internet. We encourage all of you to get involved and to make this YOUR community!