On Monday, Dive Keep & Pitch asked for some offensive efficiency numbers so I have obliged him today pulling out some critical numbers regarding scoring efficiency. Accumulating yardage is important but typically scoring has a stronger correlation to victory than yards attained (otherwise Hawai'i and Navy would win the National Championship every year). The first group of information I compiled was the number of points scored per offensive play in ACC play. The Hokies and Seminoles, our 2010 ACCCG reps, lead the conference by far in offensive points per play: 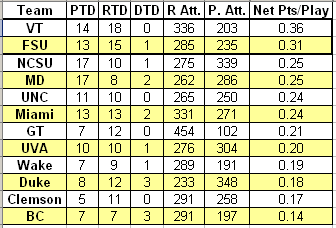 If you wanted to compare the #1 efficiency (VPI) to the #12 efficiency (BC), then you'd see it takes the Eagles about 4.8 more plays to score a point than the Hokies in ACC play. It didn't help the Eagles that they gave up 3 defensive TD's as well (DTD). Georgia Tech's 2009 offense would rank second behind VPI's (0.35 points per play).
Another method for showing offensive efficiency is in points scored per minute. The Hokies and Seminoles lead in this area as well. I was actually surprised to see Clemson as low on the chart as they are. And in contrast to the previous chart, Georgia Tech's 2009 offense would be middle of the pack in this chart (.47 points/minute). 2009's mastery of the game clock is not a friend of this methodology: 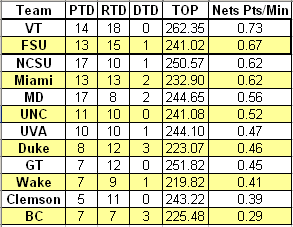 I also wanted to check out teams and their defensive efficiencies. FSU is #1 in points allowed per offensive play. FSU benefited from three defensive touchdowns. VT was still in the top third in efficiency but lost out due to lack of defensive TD's. Georgia Tech was in the bottom third. We were the second worst team as far as allowed rushing touchdowns in conference play. That is depressing. Everyone literally wanted to beat us at our own game. 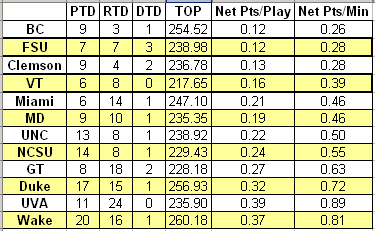 Despite BC's awful offense, the defense played superb this year. They were the #1 defense concerning points scored per defensive minute of possession. This may be attributable to good defense and offenses realizing they only need 10 points to beat BC.

Any questions or answers out there?