Georgia Tech vs. Air Force: The Birddog Teaches Us How To Cook Falcon

Share All sharing options for: Georgia Tech vs. Air Force: The Birddog Teaches Us How To Cook Falcon

In our final piece of Hunting Falcons with the Natives we've saved the best for last. We reached out to blog buddy Mike of The Birddog Blog, a premiere Naval Academy sports blog, which also contains a vast library of triple-option education. Previous pieces for our Hunting Falcons segment include Jeremy Mauss of Mountain West Connection and Chris from Army's The Unbalanced Line. Just as in those two pieces, Mike breaks down Air Force's game and throws in some well appreciated shots as well.

FTRS: Navy plays Air Force every year making you, The Birddog, one of our Air Force offense gurus. Many people believe that the Independence Bowl will be one of the fastest ever with both team's option and run heavy offenses being displayed. What are the main differences between Troy Calhoun's offensive attack and Paul Johnson's?

Mike: I guess the first difference is in pedigree. Johnson's offense is spread at its core, having evolved from his mixing of option plays with the run & shoot. Air Force's offense, on the other hand, is derived from the same wishbone offense that Ken Hatfield installed there thirty years ago. Under Fisher DeBerry, Air Force started varying the formations a bit more by breaking the wishbone and moving one or both halfbacks into the slot. They weren't truly spread; there was no run & shoot foundation in the offense, and they liked to use tight ends and fullbacks as blockers. Fundamentally, they were still running wishbone plays.

Troy Calhoun played quarterback for Fisher DeBerry and was an assistant under both DeBerry and Jim Grobe. He eventually moved on to the NFL, and was the Texans' offensive coordinator when Air Force chose him as DeBerry's successor. When he first arrived, he talked about scrapping the old offense. He said that there would be some "elements" of the option in his scheme, but that he wanted more of a run-pass balance. He also talked about the importance of having a feature tailback getting into a rhythm and getting 20-25 carries per game. That lasted up until about the time of his first practice the following spring, when he saw the talent he had on hand. At that point he probably thought, "Oh crap," and decided that maybe running the option wasn't such a bad idea after all. Air Force will throw a million different formations at you-- flexbone, shotgun, I-formation, whatever-- but for the most part they run pretty much the same stuff out of all of them. Some option, some zone stretch with the halfback and zone dives with the fullback. They look more like Jim Grobe's Ohio and early Wake Forest teams than they do Georgia Tech. Which makes sense, since Calhoun was Grobe's offensive coordinator at both.

FTRS: Every year you do a series of posts entitled "The State of the Service Academies" and in the USAF's respective entry you discuss your opinion that Troy Calhoun is spending his last season in Colorado Springs. Should this happen, does the Athletic Department have the drive, interest, or passion to find a coach who can get them to the next level or do you think the Academy is happy where it is, maintaining the status quo and focusing on Commander-in-Chief trophies?

Mike: Calhoun was on his way to Tennessee last year before some boosters stepped in to veto his hiring. He was still able to parlay the outside interest into a 5-year contract extension last January, and now that some details of that contract have emerged, I'm less convinced that he'll leave anytime soon. If he coaches at Air Force for 10 years, he will receive a monthly pension for the rest of his life. His wife will receive 2/3 of that pension for the rest of her life if he dies. That's a pretty sweet deal. Actually, I sort of wonder if Calhoun has his eye on becoming the athletic director. He made some comments back in September about how there is no excuse for Air Force's other sports not being more competitive in the Mountain West. What kind of a coach throws his colleagues under the bus like that? Either 1) a colossal dick, or 2) one who wants to run the whole department (not that the two are mutually exclusive). Air Force's AD is unpopular; he's a former chemistry professor with a penchant for losing teams and retaining bad coaches. It doesn't exactly strain the imagination to envision Calhoun replacing him.

As for the "next level," that depends on how one defines the term. They might want to start by finishing higher than 4th in the Mountain West. Most of the country sees the Mountain West as the "Big Three" of BYU, Utah, and TCU, then everyone else. With BYU in a rebuilding year, this was supposed to be Air Force's chance to fill the void left by the Cougars; instead, it was San Diego State that moved into the conference's upper tier, leaving Air Force to finish 4th yet again. Now that the Mountain West is being rearranged into the FrankenWAC, maybe they'll have a better shot at finishing second to Boise State. All five internet Air Force fans already see the Falcons as BCS contenders and get offended at anyone suggesting that they aren't "next level" already.

FTRS: Navy averaged around 303 yards rushing per game and 5.5 yards per carry in 2010.  The Air Force defense held the Midshipmen to 209 yards on the ground and 4.2 yards per carry.  How did the Falcons limit Navy's option to roughly 70% of their season average output?

Mike: Both teams are usually held to less than their average offensive output when they play each other. Air Force does a good job teaching their players how to play against cut blocks. They also try to the confuse the quarterback by running different stunts and mixing up the reads he gets. It's just a matter of the defensive coaches knowing how the other team's offense works. On top of that, Ricky Dobbs was nursing a sprained ankle, and Navy lost starting tackle Matt Molloy to a concussion early in the game. Losing him hurt a lot.

FTRS: What's the deal with Air Force being in the MWC while Navy and Army remain independent?  Is Navy interested in a move to a conference ever? Is there an interest from outside conferences to convince Navy to join them?

Mike: Navy is not going to join a conference. Every year someone starts the rumor that the Big East is interested in Navy, and every year it gets shot down. Navy has its own TV contract, can set whatever schedule it pleases, and has bowl arrangements through 2014. BCS money would be nice, but isn't necessary to stay afloat at this point. With the academic restrictions and military obligation that midshipmen are required to fulfill, the Naval Academy would be at a recruiting disadvantage to every school in any I-A conference they might join. Right now Navy's football team would be competitive in the Big East, but you can't base conference membership on how good the team is in any given year. You have to look at what your ceiling is relative to the other schools you're looking to join, and Navy's profile is just too dissimilar from that of any conference. Army learned that lesson the hard way. They won 10 games in 1996, joined Conference USA in 1998, but left in 2004 after never having won more than 2 conference games in any season. Only now are they starting to recover. There is more to Army's problems than their seven years in Conference USA, of course, but it didn't help.

Air Force was independent themselves up until 1980 when they joined the WAC. They're in a slightly different position due to geography; it's just easier to craft a varied schedule with winnable games when you're located in the middle of the east coast. The key word there is "winnable." Air Force went 2-9 in 1979 against the last independent schedule they faced, which included Wisconsin, Illinois, Kansas State, Notre Dame, Oregon, Georgia Tech, and Vanderbilt. They were getting killed. By joining the WAC, they could fill their schedule with lower-profile regional opponents that gave them a far better chance of success. That's still the case today; while the Mountain West has tried hard to push Utah and TCU's BCS success as evidence of their greatness, the truth is that the bottom half of the conference is downright wretched just about every year. Look at Air Force's wins this year: two even matchups against the other service academies, 7-6 BYU, 3-9 Colorado State, 2-11 UNLV, 3-9 Wyoming, 1-11 New Mexico, and notorious I-AA juggernaut Northwestern State. WAC and Mountain West membership essentially gives Air Force football a built-in slate of winnable games every year similar to what Army and Navy can create for themselves as independents. They just happen to be against the same teams every year.

As a side note, the Mountain West is expanding to 10 teams by 2012. If they make the conference schedule a true 9-game round-robin, Air Force is going to have the exact same schedule every year: 9 conference games, 2 service academy games, and a random I-AA turd for their opener. That has to suck. 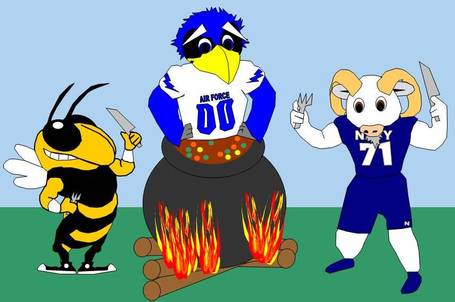 FTRS: Here's an easy one: What makes Navy better than Air Force?

Mike: You don't have enough room in your inbox to handle a full response to that question. Rather than make a list, I'll just focus on one fundamental difference.

Navy and Army proudly publicize the service assignments of their senior football players. You're never more than a quick Google search away from finding out what any of them will be doing after graduation. You won't find that kind of list for Air Force, though. For some reason, they don't want people to know. One reason might be that some of them don't do much of anything at all. The Air Force Academy has a long tradition of letting football players service select... football. An unusually high percentage of the Air Force coaching staff is made up of graduates, and almost all of them spent at least 40% of their active duty service as football coaches, or playing baseball, or doing some other vital work for our nation's defense. The message to football recruits is clear: "If we can do it, you can too!" Every service academy has guys who screw up or get hurt or something, and don't end up serving their full obligation. Navy is no exception. This is way different, though. This is basically a taxpayer-funded coaching pipeline.

FTRS: And finally, who do you think wins the Shreveport Independence Bowl?

Mike: I'm not sure that I know enough about Georgia Tech to really make a prediction. There are a lot of variables in this matchup, too. Coach Johnson has pretty much squashed any hope of Josh Nesbitt coming back. What is Al Groh going to do on defense? Will Jared Tew play for Air Force? I have no idea. One would think, though, that if Paul Johnson made a habit of beating similar Air Force teams with Navy's players, he would to be able to do so with Georgia Tech's players.

Thanks goes out to Mike and the others who joined us in previewing the Fighting Falcons for Tuesday's Bowl Game.