Share All sharing options for: Georgia Tech vs. Air Force: Re-visiting The 1977 Game

Georgia Tech and Air Force have met a total of three times before this year's Independence Bowl game. Each game came during the Pepper Rodgers' coaching era and Georgia Tech leads the all-time series 3-0. As we wait in anticipation for this football game, FTRS will be reviewing these games from the past, discussing Georgia Tech vs. Air Force history, and noting performances of historical significance (Does Eddie Lee Ivery ring a bell anyone?)

During the Air Force series, the Yellow Jackets were an independent football team. Tech had left the Southeastern Conference at the end of the 1962 season for a variety of reasons. An independent team always has the daunting task of scheduling their football games and after understanding Pepper's football history, we will assume that Coach Rodgers used his Air Force Academy connections to schedule the series. He got his first assistant position with the Academy in 1958 while serving in the Air Force and was the quarterbacks coach.

In an effort to research the Georgia Tech and Air Force series, I went to the Georgia Tech library and sorted through old Atlanta Journal and Atlanta Constitution newspapers on microfilm. Through some pretty exhaustive research I accumulated several articles from 1977 that captured the game. On the morning of Saturday, October 1, 1977 the Atlanta Journal published a preview written by Pepper Rodgers himself about the upcoming game: 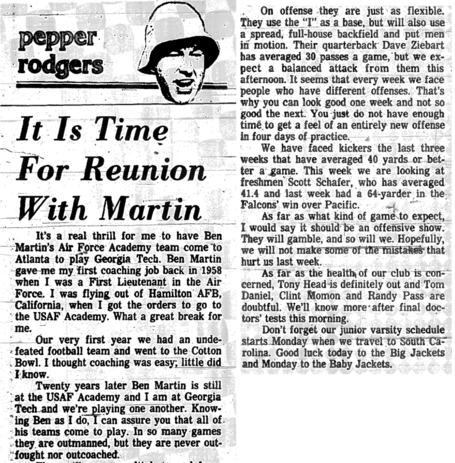 Air Force was 1-1-1 leading up to the game with Tech and had only scored 29 points in their first three games. The Falcons hadn't seen a winning season since 1973 when they were led by star wide receiver Frank Murphy. In fact, the Falcon program was only 19 years old when it first visited Georgia Tech (AFA's inaugural season was 1958). Ben Martin had been the coach for all 19 seasons and taken the Falcons to their first three bowl game appearances. In Martin's 20 year run as AFA's first ever head coach, he went 5-6-1 against Army and 5-5 against Navy.

Fans who attended the 1977 football game got the offensive show Pepper predicted...but it was by only Georgia Tech. The Yellow Jackets hammered the Falcons 30-3. Air Force was held to under 300 yards of offense while Georgia Tech played Paul Johnson-style football. They amassed 374 yards of their own on the ground and threw the ball only once, a 42 yard pass from quarterback Gary Lanier to split end John Steele. Eddie Lee Ivery gave Tech fans a glimpse of things to come scoring two touchdowns in the first quarter. One of these came off a lightning quick 62-yard punt return. The Yellow Jackets never looked back as they scored in every quarter and kept Air Force at an arms distance the entire day.

After the game, Georgia Tech improved to 2-2 overall while Air Force dropped to 1-2-1. Tech went on to finish 6-5 but did not go to a bowl game. We did beat Georgie 16-7 finishing the season on a relatively high note. Air Force finished 2-8-1 giving up an average of 27 points per game on defense (including losses to Navy and Army). Their only victories were against Pacific and Vanderbilt.