Georgia Tech vs. Air Force: The Game of Field Position

Share All sharing options for: Georgia Tech vs. Air Force: The Game of Field Position

I started breaking down the Falcons and their performance related to field position on Friday. The first thing I noticed was that they remind me a lot of the 2009 Yellow Jackets. They don't like to punt or kick field goals.

Air Force has only punted 36 times in 2010 (that's 114th out of 120 teams). Only Navy, Boise State, Nevada, and Stanford have punted fewer times. They're also 114th in attempted field goals at 10 attempts on the season. Only New Mexico, EMU, and Marshall have fewer attempts. This is probably because their kicker has a max range of 30 yards in 2010. That's promising if Tech can find a way to stymie the Falcon red zone offense. Check out how Air Force performs offensively with respect to field position: 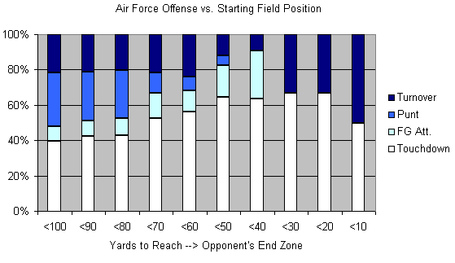 Scoring a touchdown on 40% of their drives is pretty efficient. I bet even Paul Johnson likes the fact that Air Force basically doesn't punt if they start with the ball on their own 30 (only 5 times in 42 I-A drives). This makes good field position fairly critical against the Falcons as Calhoun is pretty gutsy (~2 fourth down attempts per game).

Defensively, the Falcons are pretty stout as well. They're forcing turnovers or punts on 60% of their I-A opponents' drives. An opponent really doesn't see much of an improvement with regards to success and field position unless they get the ball between their own 40 and 50. That's really good. 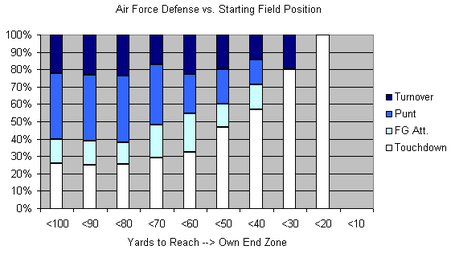 I don't want to sound like a broken record but Air Force is a really good team and has played a fairly comparable schedule to Georgia Tech. Their dogs (New Mexico, Wyoming, UNLV, and Wyoming) stack up with our dogs (Kansas, Duke, and Wake). Hence, Sagarin ranks their schedule as 67th toughest compared to ours at 64th. As I mentioned on Thursday, Tech fans better expect a tough game on the 27th.