Often times the field goal unit is a mixture of defensive and offensive players on the 2nd and 3rd teams. There may be a superstar or two with a nasty vertical leap in the mix but for the most part, it's not your starting offensive line versus their starting secondary. It's a hodge-podge of players. Today is part two of the ACC bowl slate preview series. Part I revolved around defending the tight end. Today's preview revolves around field goal kicking and blocking units. And the first topic I wanted to discuss was field goal unit range of the ACC's kickers. 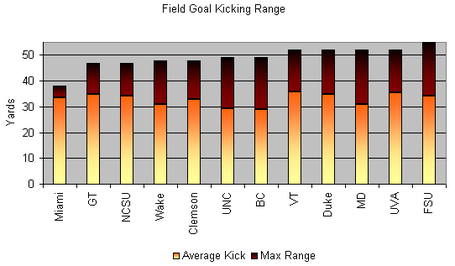 Florida State's Dustin Hopkins has the longest made kick in 2010 ACC play at 55 yards. His accuracy in 2010 has been a little suspect as he finished the regular season with the 2nd worst field goal accuracy of ACC kickers in conference play. I don't like giving props to the Hokies but Chris Hazley led the conference making 14 of 14 field goal attempts and had the highest average field goal attempt in ACC play at 35.6 yards per attempt. 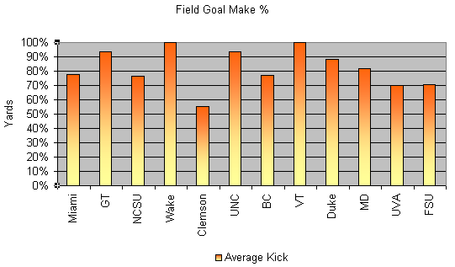 A lot of Florida State fans may argue for Hopkins. He has had a pretty tough road as no other ACC kicker even attempted more than one 50+ yard kick. Hopkins attempted 3 in 2010. So if we were to break down the kicks each kicker attempted by difficulty, the chart below would tell more of a story. It shows the accuracy each team should've expected based on the difficulty of their kicker's 2010 kicks. 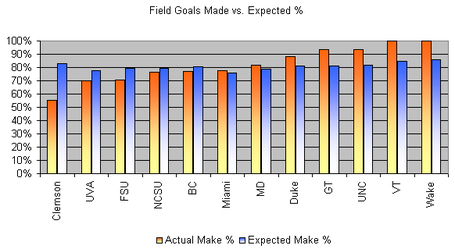 A lot of the Tech fans reading this are probably thinking, "Did Tech succeed in any particular area concerning special teams?" Well, we definitely made over 11% more of our field goals than the ACC's average kicker would have made in 2010. Also, Tech fielded the best field goal defense in ACC play. We didn't block any kicks but opponents only made 57% of their field goal attempts against Tech in 8 ACC games. This can definitely be attributed to a good push from our field goal blocking unit, disruptive edge rushers, and some athletic leapers in the middle affecting the kicker's aim. 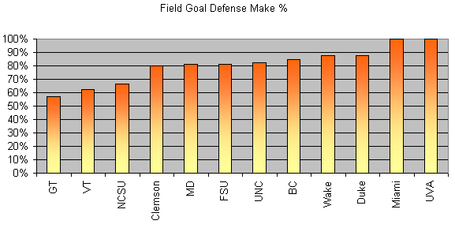 And the final group of stats I wanted to pull up was to see who had the best blocking unit. Or basically who blocked the most kicks per attempted kicks. The winner is Clemson by a landslide. Clemson blocks about 8% of its opponents PAT attempts and 7% of its opponents FG attempts. The worst blocking unit is NC State who allows opposing teams to block 12% of its field goal attempts. 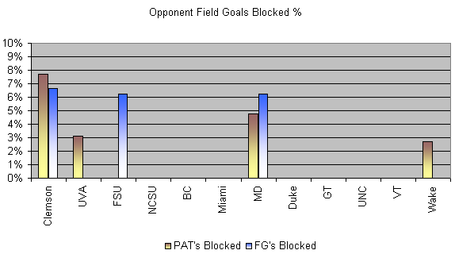 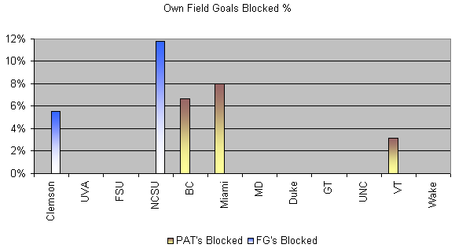 Any thoughts on field goals or PAT's? I personally am going to avoid mentioning the acronym PAT forever.